Excelsior Correspondent
SRINAGAR, Nov 17: DGP Dilbag Singh inaugurated Zonal Cyber Police Station at District Police Office and refurbished Police Component Office (CARGO) here.
DGP also chaired an officers meeting wherein he reviewed security and law and order in Srinagar district. IGP Kashmir SP Pani accompanied DGP during his visit to DPO Srinagar. SSP Srinagar Dr Haseeb Mughal and other Zonal SPs were also present during the meeting.
During his interaction with the senior officers, on the very outset, the DGP sought individual briefings on important subjects of law and order, security of vital installations, preventive measures taken and surveillance through different methods.
DGP Dilbag Singh asked the officers to remain alert, fully prepared to thwart any act of saboteurs. He said that the Pakistan and handlers of terrorists have become desperate and have tried various tactics and violence to provoke and scare people. DGP directed the officers to identify the saboteurs and the elements which may disturb the peace. He said that the issues with regard to traffic regulations should be looked into so that the general people do not face any problem while commuting from one place to another.
He said that the challenges of militancy have been faced effectively in the past and more needs to be done on this front to curb it completely. He said that the cases of the militancy and violence by the terrorists and mischief mongers should be taken to logical conclusion by doing appropriate investigations.
DGP directed that the mischief mongers should be booked under stringent laws. He said that effective steps must be taken against drug peddlers and NDPS cases should be investigated thoroughly.
He also directed field officers to take good care of the deployments and constabulary by taking measures for keeping them comfortable in the harsh winter months especially during night duties.
IGP Kashmir SP Pani, SSP Srinagar Dr Haseeb Mughal and Zonal SPs in their briefings highlighted the measures taken for the maintenance of law and order and also highlighted some demands to which DGP J&K said that they will be looked into favorably. 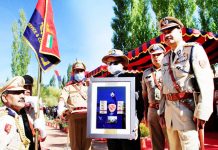