I had been to Gharana Wetland R S Pura yesterday. The moment I reached there, the first thing which caught my attention was a concrete mixture running to prepare mortar for building a drain 20-30 feet away from bank of Wetland. The noise produced by mixture running on a diesel engine, was keeping the birds away towards a maximum distance, they can.
Even a human being, like me who is used to live among such running and noise producing machines was disturbed. What about these birds who lives in serene atmosphere only.
I observed the strength of birds was far less which I saw last year.
The period of stay of migratory birds in Gharana is 2-3 months only, and the authorities concerned have a time of 8-9 months to do any construction activity there, meant to save this Wetland. Would not the construction activity during birds stay, hampers their visit in next winter. Will it not change their behaviour. Is this not an act of contributing towards already dying Wetland. What are authorities for ?
I would like to draw the attention of authorities concerned towards this callous approach and take remedial measures.
Vikram Dhir Singh

This is to draw the attention of the District Administration Udhampur towards the dilapidated condition of the road leading to historical Devika temple. This road connects important places enroute like graveyard, Sai temple, Ram temple, Mangu Ki Bawle, Government Degree College etc. As the 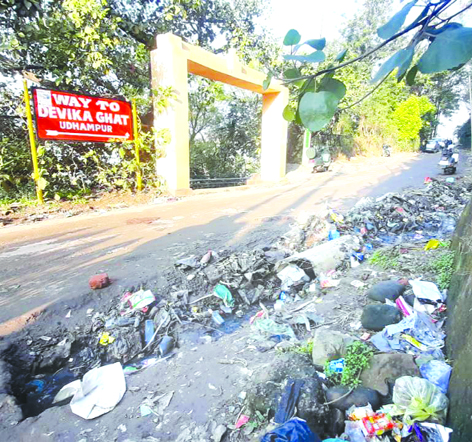 road is in bad condition, people using this road suffer a lot. The situation worsens a lot during rainy days. The puddles all along the road cause immense inconvenience to people, and cause wear and tear of vehicles.
The matter had been raised earlier also, but no step has been taken to blacktop it. It is urged to the district authorities to get it repaired at the earliest.
K Kumar
Udhampur

This is to draw the attention of the concerned authorities in JMC, Jammu and the Corporator that street lights in sector-I , Lane No. II and in sector 2, Lane 4, Pole Nos 998,999 and 1000 are not functioning for the last two months. Without these light, residents of the lanes face some inconvenience.
It is requested that these street light be replaced by new ones at the earliest.
Vinod Kumar
Swarn Vihar

The Bhadarwah Administration is once again urged to get traffic streamlined in Bhadarwah town. The traffic congestion in this beautiful town has become a perennial problem with no solution in sight. The chaotic traffic has made the life of people here quite miserable.
People are witness to traffic snarls which at times prolong for a pretty long time causing great inconvenience to commuters as well to motorists.
The drivers too are seen fighting with one another over overtaking etc.
As the number of vehicles is on the rise so is the number of road accidents and fighting incidents. Besides, one can see people parking their vehicles in lanes and bylanes leaving little space for pedestrian movement.
There is urgent need to address this problem for the sake of residents living here. The administration must deploy more traffic police personnel in the town to manage the traffic.
Nazir Ahmed
Bhadarwah 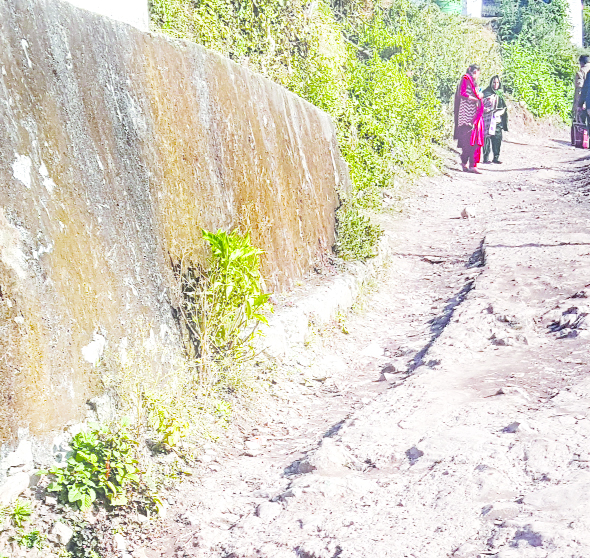 Sheetal Nagar alias Bhoond is a revenue block of Basohli and it falls half way Basohli Bani route. The local Hr. Sec. School is located at about one km. distance from the town. The approach road to the school shared by the hundreds of students coming from the hilly terrains is totally in the dilapidated condition. It is full of pot holes and the entire link road is muddy and slippery where many students especially the school going children slip sustaining injuries. The link road falls under the Panchayat but neither the sarpanches nor the panches or the administration pays any heed toward the condition of the road. Many times it becomes difficult to carry the material needed for the development of the school. The School being situated on the outskirts of the village Sheetal Nagar has no other easy approach. The Administration is, therefore, requested to pay attention to the road which is used by the students especially the children.
Shiv Kumar Padha
Basholi This is to draw the attention of the concerned that the incomplete drain work at Ward No. 73 Lower Gadigarh Jammu has been a source of infection, unhygienic conditions, nuisance for the passers by and a basic requirement unaddressed since 2014.
Although the issue has been highlighted earlier also through this medium but except preparation of DPR no permanent redressal of the issue has been done till date due to delaying tactics on the part of executing agencies. Even recently the issue was again raised via LG’s grievance cell and the exercise of formal visit of concerned JE and field staff stands completed. But, the ultimate question arises whether the grievance will be redressed or not. We the inhabitants of the locality request the concerned to get this work executed this time and if feasible visit this highly backward area of Ward No. 73 falling under JMC.
Dr. D K Sharma,
Vipin Sharma,
Naresh Sharma

The drain outside PHC Sainik Colony Jammu remains blocked almost through out the year and the sanitary conditions from entrance of PHC to dispensary are worst and many bikes remain parked inside. Stagnant dirty water at the entrance of PHC is a question mark on the health of the patients who report for availing health care facilities.
Concerned agencies either it be JMC, Health or PWD departments may take cognizance of the matter and address the problem on war footing.
K. K. Sharma
MGS Vihar Sec D Ext
Sainik Colony, Jammu

This is to draw the attention of Mayor, Jammu towards the civic problems that beset Ramzanpura Mohalla Ward No. 60, Janipur.
This densely populated area reek with stench as its streets are littered with garbage and drain are choked with household filth. Since no sweeper comes to clean it on daily basis, the residents are forced to live in such unhygienic conditions.
At some places the filthy water flows onto the road surfaces causing great inconvenience in smooth vehicular and pedestrian movement. Besides, the accumulated water in pits becomes a breeding ground for mosquitoes and other insects.
In this regard, we made several pleas to the concerned authorities but our efforts have not yielded any positive results so far. But this time we seek your attention in the matter so that this matter can be taken on priority basis and residents are relieved of the agony of unhygienic conditions in the Colony.
Mohd Irfan
Ramzanpura Mohalla
Ward No. 60

This is to draw the attention of the Traffic Department towards chaotic traffic on Jewel-Bohri road. Being a busy road the commuters usually witness chaotic traffic scenes almost on daily basis. As the number of vehicles is rising, so is the chaos.
To avoid this situation, it has become necessary that the road be streamlined by making it a two way road, besides deploying additional traffic personnel on it. There is also need to instruct pushcart holders and other vendors not to occupy the road space.
Those violating traffic rules especially matador drivers be taken to task. Once these measures are taken, it is hoped this traffic problem can be tackled.
Vikas Sharma
Talab Tiloo

One does not know how many times we have to approach JMC authorities for repairing Rajinder Nagar (Bantalab) road. He road is badly damaged at various places with pot-holes and puddles dotting its entire length. These pot-holes are motorists nightmare especially during night hours when one fails to judge them. As a result four wheels vehicle suffer extensive wear and tear, while scooterists skid in these dangerous pot-holes.
The entire stretch needs to be black-topped besides having side drains for rain water to escape.
This issue has been raised a number of times but JMC, it seems, does not bother about this road much.
Anita Mahajan
Rajinder Nagar (Bantalab)

Cover open nullah near High Court
Lest we fall into the ditch!

As you enter the Janipur road from Bullock Cart road, and drive towards Roop Nagar colony, midway you come across a Bharat Petroleum petrol pump on your left and a statue in black stone on your right.
As you take a right turn past the statue, you are on the Mehr Chand Mahajan road that leads you to the High Court of Jammu and Kashmir.
The black statute at the crossing belongs to Justice Mehr Chand Mahajan. The first Prime Minister of the State of Jammu & Kashmir, after the partition of British India and before the accession of the State to India.
Justice Mahajan has the rare honour of being the first Prime Minister of the independent State of Jammu and Kashmir from 15 October 1947, before Pakistan invaded the State on the 22nd October.
He was also the first Prime Minister of the State as it opted to accede to the dominion of India on 26 October 1947.
Today, Mehr Chand Mahajan Road is a death trap that awaits it’s victims in great expectations. The nearly one kilometre long stretch to the High Court is adorned by a deep mullah on the left edge.
On the right side of the road are shops catering to the needs of about 1000 practitioners of law. Two wheelers and cars are parked outside the shops making the road still narrow.
As you drive up the steep gradient towards the court, you are forced to negotiate with the vehicles coming down from the opposite direction.
Unless you are a brave and nonchalant driver, shivers go down your vertebrae as you give way to the incoming vehicles from the opposite direction, side-by-side.
In doing so, you expose yourself to the grave dangers of falling into the open and uncovered nullah on your left that is as wide as three feet and deeper still, at places.
We call upon the concerned civic authorities to take suo moto notice of the situation and take urgent action to cover the open nullah, thereby providing a safe commute to the thousands of distraught litigants, honourable judges and practitioners of the noble profession.
Squadron Leader Anil Sehgal
Jammu

I would like to draw the attention of the concerned authorities on the issue of traffic jams in Jammu now a days.
* It is being caused due to extreme weather conditions like fog in the morning and evening.
* Construction works that is under progress due to smart city.
* Unsystematic parking of vehicles beside the road.
* Over bridges, by pass road flyovers as seen in Bari-Brahmana area now a days.
* Local transport like matadoors, e-rickshaw, autos stopping at any point to pick the passengers.
* Obstacles are seen on the road due to potholes.
* Sometimes traffic lights are working and sometimes not working which is posing a major risk to people using the roads.
In order to improve the traffic situation in Jammu, I suggest the following steps that should be taken into consideration:
* The construction works on the roads must be completed with urgency.
* Sufficient traffic personnels must be deployed at key positions and at different points to keep a watch on the road especially at peak hours so that drivers are forced to obey the rules.
* Only those vehicles should be allowed on the roads which are fit in all respects.
* Traffic staff should be efficient and honest.
* Over speeding should be checked and driver found guilty should not be spared.
* Public awareness camps should be given importance.
I hope these suggestions are taken into consideration.
Ritu Sharma
Jammu