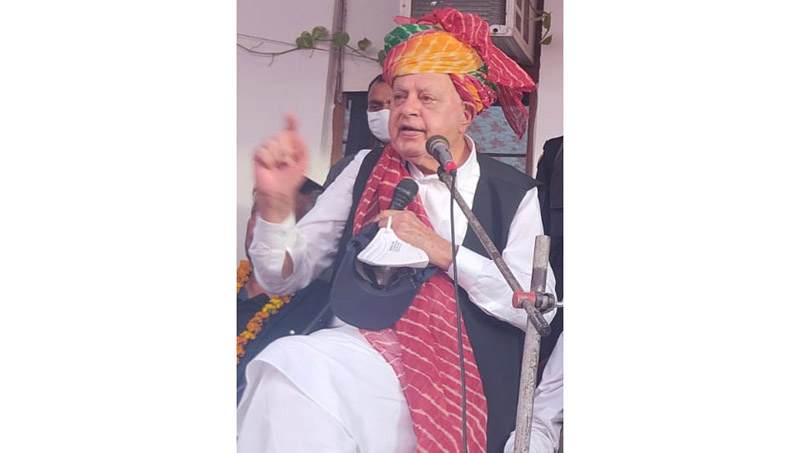 JAMMU, Mar 13: National Conference president and former Chief Minister Dr Farooq Abdullah alleged that Jammu businesses were facing the brunt of present bureaucratic rule in the Union Territory and locals were being sidelined to pave the way for outsiders.
“People of Jammu are witnessing slow death to their exclusive jobs and those at the helm of affairs have brought the entire region to this appalling condition,” he said while addressing a party convention in Samba late last evening.
Contending that Jammu’s local economy was being strangulated as outsiders were being facilitated to take over businesses here, Farooq Abdullah gave reference of the proposed opening of Retail stores here that has triggered anxieties among local traders.
“My Dogra brothers well understand that the assault on their trade is not a case in isolation. Everyone here in Jammu knows that such a measure is part of the systematic pattern to elbow out locals, the Dogras from the businesses and pave the way for the outsiders, who have already taken away a sizeable share in mining and other contract allotments, directly or indirectly, in the region after August 2019,” he added.
Farooq Abdullah further alleged that the uncertainty, unaccountability, unemployment and development deficit, which have gripped Jammu for the past eight years appear far from over.
“While the economy fast dissipated and development came to a grinding halt, the ever growing unemployment, inflation, development deficit, administrative inertia, wanton demolition drives seem to be the only notable feature of the current bureaucratic rule,” he said
The NC president, who is also Member of Parliament from Srinagar Lok Sabha seat, reiterated his call of unity against the divisive and communal agenda being spread across the country, including J&K by forces inimical to communal harmony.
“People will inflict a collective punishment on communal and divisive forces, which are working day in and day out to liquidate the exclusive rights of diverse sections of Jammu,” he said.
NC president also pooh poohed Government claims of peace and said: “The deteriorating security situation, everyday killings of grassroot level political activists, grenade blasts lay bare the ground realities and puncture the Government’s peace claims.”
Among others, NC provincial president Jammu Rattan Lal Gupta, senior leader Ajay Sadhotra, YNC provincial president, Jammu Aijaz Jan, Israr Khan, Hameed Choudhary, Chander Udhay Singh, Dev Raj Kapoor, Ashwani Abrol and other local unit functionaries were also present on the occasion.