Click here to watch video
A number of people received the holy mace at Doda amidst tight security arrangements and sought the blessings of Machail Mata.
This year only around 8000 people could pay obeisance at the revered shrine since the commencement of yatra from July 25 as due to security advisory issued by the Government the pilgrimage had to be suspended early this month.
As per the official figures, a total of 2,26,725 pilgrims had paid obeisance at the revered shrine last year and had there been conducive atmosphere this year the pilgrimage would have crossed this figure. 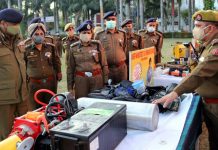