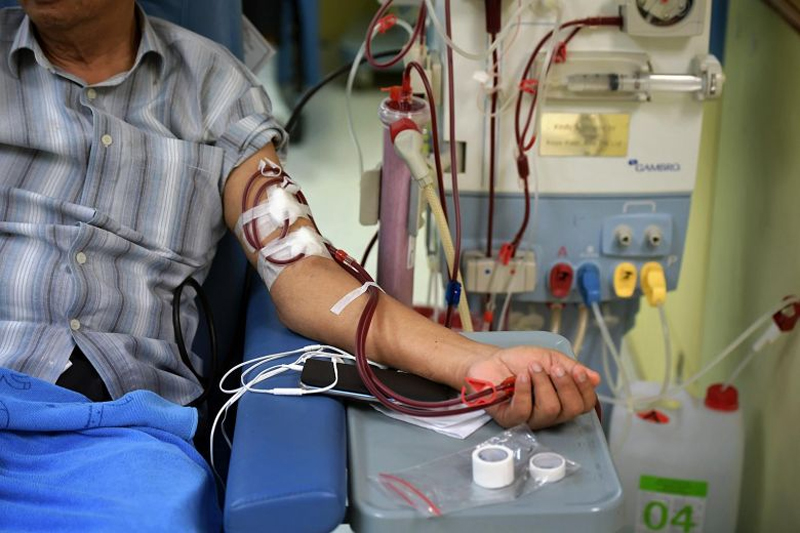 Gopal Sharma
JAMMU, Dec 10: A large number of kidney patients in border districts of Poonch and Rajouri badly suffer as the Dialysis units of both the district hospitals are lying defunct for the last more than 12 days.
Official sources told the Excelsior that Dialysis unit of Rajouri hospital is lying defunct for the last 12 days while nearly 22 kidney patients of the area have been forced to go to Jammu for routine dialysis. Many of them belonged to poor families are unable to bear the costly kidney treatment in Jammu hospitals.
The GMC Hospital administration at Rajouri has failed to get the unit operational despite aggravating sufferings of the patients of the area. There are 4 dialysis machines in Rajouri hospital.
Principal, GMC & Hospital, Rajouri, Dr Kuldeep Singh when contacted said that he has written to the authorities at Jammu for the repair of the machines. He said the technician would come from Srinagar. They have not sent him so far. As and when the machines are repaired, the Dialysis unit would be made functional.
Sources further added that Dialysis unit of District Hospital Poonch with 4 machines, is also lying locked for the last about two weeks. That unit is also defunct for want of repair work. About 14 regular kidney patients of Poonch area are suffering and have now shifted to Jammu for the facility.
When the Dialysis unit turned out of order about two weeks ago, the patients from Poonch moved to Rajouri hospital but in next three days, the Rajouri unit also was closed telling that machines have gone out of order. Then the attendants also shifted their kidney patients to Jammu. Much pressure has been exerted on Super Specialty Hospital Jammu for shifting of patients. With the result, some patients have moved to the private hospitals.
Meanwhile, DC Rajouri, Nazir Sheikh along with ADC, Sher Singh, Assistant Commissioner Revenue, Mohammad Ashraf and Deputy Director Planning Bilal Mir, paid surprise visit to GMC Rajouri and its Associated Hospital during night and was annoyed to see the state of affairs there.
All the officers in the guise of attendants of patients with no escort and supporting staff entered the hospital. The secret inspection lasted for three hours during which the team checked several sections including patients register, testing equipment, ECG room, dialysis unit, wards and wash rooms. The officers also interacted with the patients to enquire about the facilities being provided to them.
During inspection, it came to the notice that a single doctor on duty in the Emergency Block of the hospital was looking after the patient care in the entire hospital with no other doctor deployed for night duty. Even sensitive Gynaecology and Special Neonatal Care Unit (SNCU) were being run by supporting staff in absence of doctors.
Majority of the bathrooms of the hospital were in the worst condition in terms of hygiene level and bathroom of Orthopaedic Ward was without any illumination.
In the majority of the wards, no duty roaster were displayed while some wards were having incomplete duty roster. The Blood Bank and Laboratory sections were being run by a single employee in the night hours whereas, no ECG technician was present for night duty and a male Staff Nurse was running the affairs of ECG.
The main ECG section was also found locked and CT scan machine lying dysfunctional since years whereas, Dialysis ward was also locked reportedly due to snag in machinery.
During inspection, it was also found that some officials were absent from duty, whereas, some other officials were impersonating duties in place of those mentioned in roaster. Patients of the hospital along with their attendants complained large scale presence of rodents in the hospital.
Taking serious note of it, the DC ordered suspension of Dr Riaz Ahmed posted in SNCU and two staff nurses namely Umaira Rashid and Balkees Khanum. For poor work culture, explanation has also been sought from Medical Superintendent of the hospital.