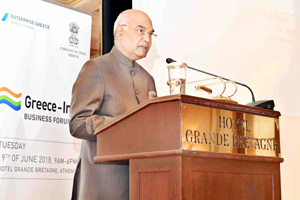 ATHENS, June 19: India and the EU must persuade the world that there is no difference between the “good” and “bad” terrorists, President Ram Nath Kovind said today as he called for sanctions on State sponsors of terrorism, in an apparent reference to Pakistan that has been long blamed for providing safe havens to terrorists.
He also said that India was committed to an international order marked by robust, rules-based multilateral institutions, by multi-polarity in international governance, and by connectivity projects that are viable, sustainable, respect the sovereignty and territory of nation.
“Pockets of instability and extremism can be found in the region to Europe’s east and India’s west. They are a worry for both Europe and India,” Kovind said in a major speech on India’s relations with Europe at an event organised by the Hellenic Foundation for European and Foreign Policy – a leading foreign policy think-tank.
Identifying radicalisation and terrorism as pressing global concerns, Kovind said that promotion of terrorism by state and non-state actors, extremism rooted in senseless hate, the proliferation of sensitive weapons, the use of regular communication and financial channels by terror groups pose a challenge to not one nation or the other but to all humanity.
He also sought strengthening of multilateral platforms such as the Financial Action Task Force (FATF) and the Global Counter-Terrorism Forum to combat the menace and squeeze terrorists’ financing.
India, Afghanistan and the US accuse Pakistan of providing safe havens to terrorists, elements of the Afghan Taliban and Haqqani Network. Pakistan, however, denies the charge.
In February, the 37-nation FATF placed Pakistan on a watch list of the countries where terrorist outfits are still allowed to raise funds. At a meeting in Paris, Jamat-ud-Dawa chief and 2008 Mumbai terror attack mastermind Hafiz Saeed and his “charities” were top on the list of the groups that the FATF wanted Pakistan to act against.
“India and the EU must persuade the world to not distinguish between so-called ‘good’ and ‘bad’ terrorists, to shame and sanction state sponsors of terrorism, and to strengthen multilateral platforms,” Kovind told the gathering of diplomats, policymakers and academics.
He expressed India’s willingness to share its domestic experiences and success stories in a manner that may be useful to EU.
“India is committed to world peace,” Kovind said, adding that India is a steadfast friend and a stakeholder in the continued security and integrity of Europe.
He said that India “sees peace not just as the absence of conflict but as a reflection of sustainable development and indeed of any effort that anticipates and prevents strife and suffering”.
“When we work for combating climate change, we contribute to world peace. When we assist other developing countries, as per their priorities, and strive for a less unequal world we contribute to world peace. When we rescue and evacuate not just our own citizens from troubled regions, but those of 40 other countries – as we did during the Yemen crisis of 2015 – we contribute to world peace,” he said.
Kovind said that India was committed to an international order marked by robust, rules-based multilateral institutions, and by connectivity projects that are viable, sustainable, respect the sovereignty and territory of nations.
China is engaged in hotly contested territorial disputes in the South and East China Seas. Beijing has also made substantial progress in militarising its manmade islands in the past few years, which it says it has the right to defend.
Beijing claims sovereignty over all of the South China Sea. But Vietnam, Malaysia, the Philippines, Brunei and Taiwan have counter claims. In the East China Sea, Beijing has territorial disputes with Japan.
China is also engaged in an ambitious connectivity project – the Belt and Road Initiative – with an aim to link Southeast Asia, Central Asia, the Gulf, Africa and Europe with a network of land and sea routes.
India has not endorsed the BRI as a USD 50 billion China-Pakistan Economic Corridor, which is part of the BRI, passes through Pakistan-occupied Kashmir (PoK).
On clean energy and climate change, Kovind said that India and the EU are united in their commitment to the 2015 Paris Agreement. “India is scaling up the share of non-fossil fuels in its energy mix. This will go up from the current 31 per cent to 53 per cent by 2027,” he said.
The President invited Greece to join the International Solar Alliance (ISA). He also expressed happiness at the European Investment Bank’s willingness to mobilise finance for affordable solar energy projects in ISA member countries.
“The EU is among India’s largest trading partners,” the President said, adding that EU is a critical source of investment and technology, especially for sustainability programmes.
He also said that India was committed to an India-EU Broad-based Trade and Investment Agreement (BTIA), to be achieved in a generous spirit of mutual accommodation and of pragmatism.
“India and Europe must work together to ensure that the multilateral mechanism remains resilient and serves future generations – as well as accommodates new actors with a merit-based claim for a seat at the table,” he said.
“Our cooperation – whether diplomatic and political or business and security – rests on a firm people-to-people understanding. There is no substitute for that. The people of India and of Europe have carefully built and tended our relationship, over centuries,” he added. (PTI)