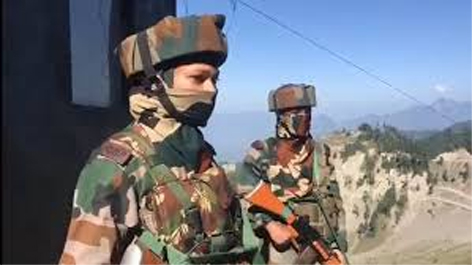 A moment to cheer up and yet another glorious step towards imparting due recognition to the capabilities and the valour of our women soldiers of the Army, history makes it quite different and even unique as women soldiers are deployed for the first time for the internal security and combat operations near the Line of Actual Control in Kashmir. These women soldiers are from Assam Rifles and have been sent to North Kashmir in the most sensitive Tangdharsector and deployed at the security check point on the road which leads to LoC villages and vital defence installations.
Though for over two decades in the army , women soldiers have never made it to serve in this part of the country and that also at an altitude of 10000 ft from the sea level. Deploying these soldiers for internal security and combat operations, they are expected to play more vital roles for the upcoming challenges. Smuggling in of arms and ammunition from across the border and trafficking in drugs shall come under strict surveillance and control with these deployments as reports are that treacherously, women are pressed into ‘service’ for carrying out the smuggling activities . A post which is named after the notedfilm actress Sadhna who visited the spot during 1965 war and called Sadhna Post is here in Tangdhar sector where also these women soldiers are deployed.

‘Black sheep of the family’

Government’s own directives remain not fulfilled

Tainted Netas get a reprieve from SC