E-Paper
Home Todays story Will give terrorists answer in language they deserve: Modi 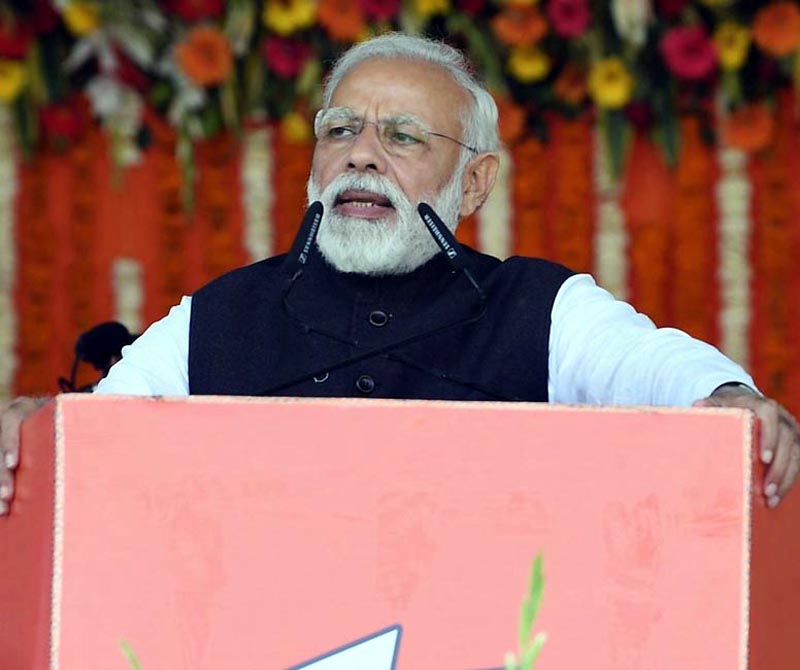 JAMMU, Mar 22: Prime Minister Narendra Modi today declared that the terrorists will be given answer in the language they understand and that too with interest as this is a New India even as he took the Opposition parties including Congress and Samajwadi Party to task for their comments on Pulwama terror attack and air strike by India inside Pakistan in which number of Jaish-e-Mohammed militants were killed.
“This is a New India—we will answer terrorists in a language they understand and with interest,’’ the Prime Minister said in a series of tweets tagging the tweets of Sam Pitroda, Indian Overseas Congress chief and Ram Gopal Yadav of Samajwadi Party, who had commented on Pulwama terror attack and Indian air strike at Jaish-e-Mohammed training camp at Balakote in Khyber Pakhtunkhwa in Pakistan on February 26, just 12 days after terror attack in Pulwama in which 44 CRPF jawans were martyred.
“Loyal courtier of Congress’ royal dynasty admits what the nation already knew—Congress was unwilling to respond to forces of terror. This is a New India—we will answer terrorists in a language they understand and with interest,’’ Modi said in another tweet tagging Pitroda’s quote with his tweet which says: “Don’t know much about attacks, it happens all the time, attack happened in Mumbai also, we could have then reacted and just sent our planes but that is not right approach. According to me that’s not how you deal with world’’.
Asserting that the tweet (of Sam Pitroda) was aimed at demeaning India’s armed forces, Modi said: “the most trusted advisor and guide of the Congress president (Rahul Gandhi) has kick-started the Pakistan National Day celebrations on behalf of the Congress, ironically by demeaning India’s armed forces’’.
It may be mentioned that Pakistan’s National Day was boycotted by the Indian Government in view of invitation extended to the Hurriyat Conference.
“Opposition insults our forces time and again. I appeal to my fellow Indians- question Opposition leaders on their statements. Tell them- 130 crore Indians will not forgive or forget the Opposition for their antics. India stands firmly with our forces,’’ the Prime Minister said.
Describing Opposition as natural habitat of terror apologists and questioners of armed forces, Modi said the reprehensible statement by a senior (Samajwadi Party) leader like Ram Gopal Ji insults all those, who have given their lives in protecting Kashmir.
“It humiliated the families of our martyrs,’’ Modi remarked.
The Prime Minister tagged the quote of Ram Gopal Yadav in Hindi in which he had alleged that soldiers were killed for votes and that there was no checking on Jammu Srinagar National Highway while referring to Pulwama attack.
Meanwhile, BJP president Amit Shah and Finance Minister Arun Jaitley also targeted the Congress with Shah claiming that the opposition’s heart beats for terrorists while his party’s beats for the tricolor.
Reacting to Pitroda’s comments, Shah tweeted, “Difference between the Opposition and BJP is clear. They suspect our army, we are proud of our army. Their heart beats for terrorists, ours beats for the Tiranga. This election, through the power of your vote, do a surgical strike on the Congress culture.”
Jaitley dubbed the Congress leader’s remarks as “unfortunate” and a “blessing for Pakistan’s narrative”.
He said no country except Pakistan has criticized the surgical strikes or the air strikes conducted by India.
“The fact that senior Congress leaders are speaking the same language is unfortunate and also hurts the sentiments of the country. To say that Pulwama attack was self-engineered is a blessing for Pakistan’s narrative,” Jaitley said.
BJP leader Ravi Shankar Prasad said Pitroda was not an ordinary person but an “adviser, chief strategist and alter ego” of Rahul Gandhi.
Another party leader and Union Minister Sushma Swaraj tweeted, “Sam Pitroda – I am shocked to see your remarks. The whole world is with us in our fight against terror except few like you and your patrons.”
Slamming Pitroda’s remarks, Union Minister Prakash Javadekar said they reflect the mindset of the Congress and its leaders who keep siding with Pakistan than with their own country.
Javadekar said, “The statement by Rahul Gandhi’s guru and main advisor Sam Pitroda is shocking which reflects the Congress’ mindset. They are absolving Pakistan from terrorism and they are blaming India for taking action against terrorism.”