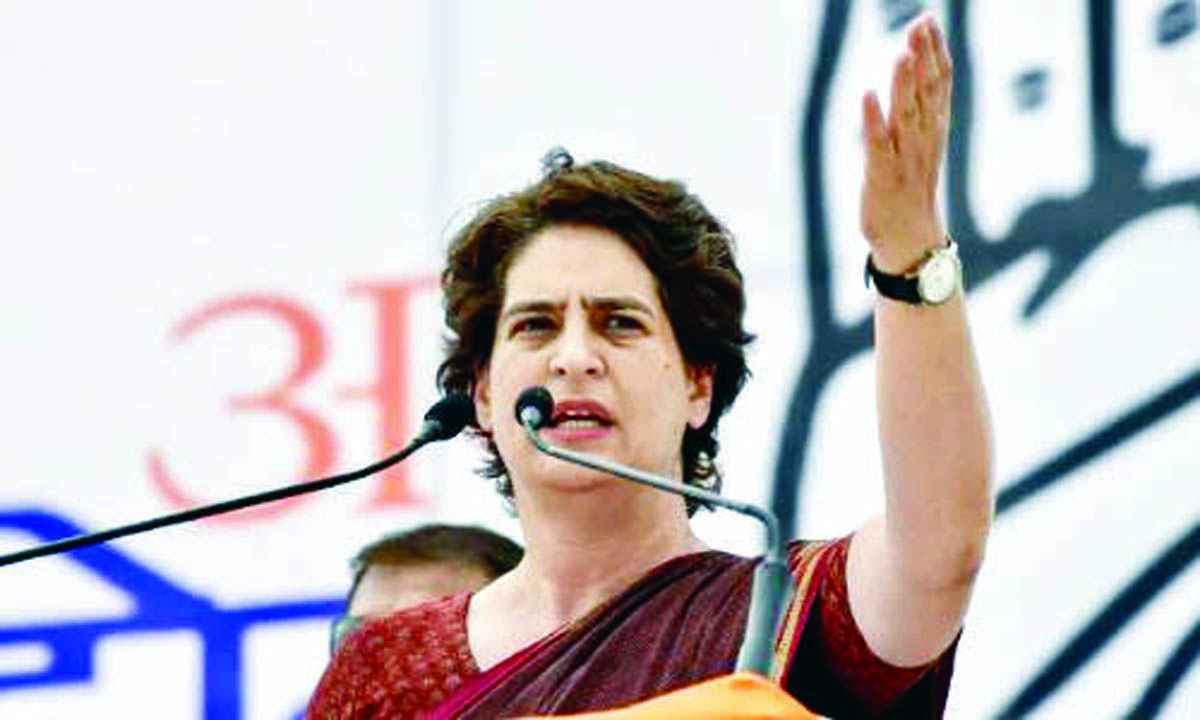 NEW DELHI, Aug 31: The Congress on Saturday attacked the BJP government over the slump in the GDP, with party leader Priyanka Gandhi Vadra demanding that the Centre clarify who is responsible for “destroying” the economy.
Gandhi on Twitter said the government that trumpeted of bringing “achche din” (good days) has now “punctured” the economy.
“The GDP growth rate clearly shows that the government trumpeting about ‘Achche din’ (good days) has punctured the state of the economy. Neither is GDP growth nor is the Rupee strong and jobs are lost. Now clarify as to whose act is it to destroy the economy,” she said in a tweet in Hindi.
Sharp deceleration in manufacturing output and subdued farm sector activity pulled down India’s gross domestic product (GDP) growth to over six-year low of 5 per cent in the April-June quarter of 2019-20, according to official data released on Friday.
Congress leader Jairam Ramesh said, “Remember the hit movie QSQT – Qayamat Se Qayamat Tak?. Now QSQT is synonymous with Quarter Se Quarter Tak. Two consecutive quarters of low GDP growth sought to be buried by managing headlines.”
Congress spokesperson Manish Tewari also hit out at the central government over the low GDP growth.
“GDP growth is not 5 pc it is 3 pc. There is a statistical bump of 2 pc due to change of base year from 2004-2005 to 2011-12. ELEPHANT in room is-GOVT CREATED TERROR – The systematic destruction of the economic environment by the brutal and indiscriminate use of IT, ED, CBI over past 5 years,” he tweeted.
Senior spokesperson Anand Sharma asked the government not to make boastful claims and instead inform the country about the roadmap for the recovery of the Indian economy, which he said is under a downward spiral “under your watch”.
“The ‘State of Economy; in BJP rule. Is this the ‘New India’?” Randeep Surjewala wrote on Twitter, adding a graph of GDP growth in January-March 2018 quarter from 8.1 per cent to 5 per cent in April-June 2019 quarter.
Party spokesperson Abhishek Singhvi said India’s GDP growth rate is 5 per cent but even this is according to the new methodology which comes with a “Modi booster”.
“Real GDP minus Modi booster is around 3 pc,” Singhvi said.
“No wonder we had Balakot breastbeating, questioning nationalism, disbursal of cash just before elections. 6 quarters went from 8 pc to 7 pc onwards to 5.8 pc and now to 5 pc quarterly GDP growth. With this clear trend over 18 months, despite all packages, this government has had no effect,” he said on Twitter.
The Congress had on Friday said the slump in GDP is a “Modi-made disaster”, and demanded that a financial emergency be declared in the country.
The truth can no longer be hidden despite “headline management” by the ruling dispensation, the opposition party had said. (PTI)