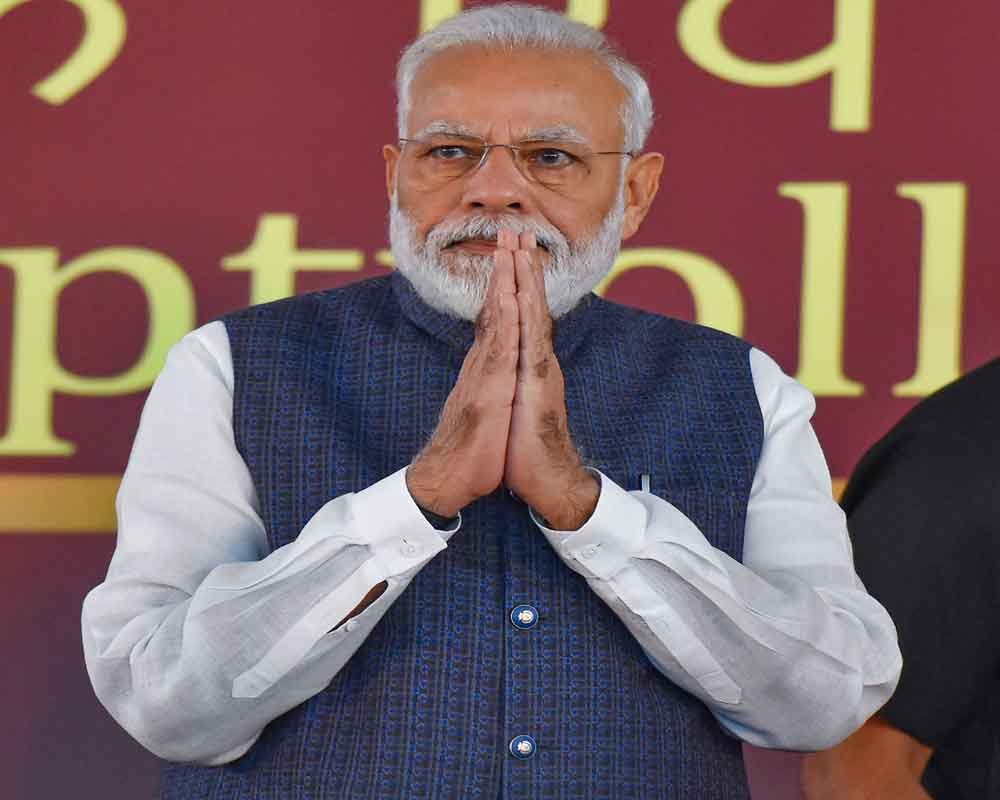 *Return to mainstream, have faith in capabilities
‘Problems can be solved seeking optimal solution’

JAMMU, Jan 27: Prime Minister Narendra Modi has called upon all those seeking solutions to their problems through violence and weapons to return to the mainstream and have faith in their capabilities to address their issues saying the violence never resolves any issues.
The Prime Minister made the appeal in ‘Mann Ki Baat 2.0’ on the occasion of last Sunday of January coinciding with the Republic Day celebrations.
Modi didn’t name Jammu and Kashmir while making appeal to those who have taken up weapons to return to the mainstream.
“On the solemn occasion of Republic Day, I would appeal to anyone in any part of the country, who’s still seeking solutions to problems through violence and weapons, to return to the mainstream. They should have faith in their own capabilities and capabilities of this country to resolve issues peacefully,’’ the Prime Minister said.
Asserting that now we live in the 21st century which is the era of knowledge, science and democracy, the Prime Minister asked: “Have you ever heard of a place where peace and goodwill have been impediments in the quest of a good life’’?
He said violence never resolved any issue.
“No problem in the world can be solved by creating another problem. It can be solved by seeking an optimal solution,’’ Modi said.
The Prime Minister called upon the people to come and join hands to make a ‘New India’ together,
“Come, let’s together forge a ‘New India’, where every issue is resolved on a platform of peace. Solidarity should be the key to resolving every issue. And brotherhood, should foil every separatist attempt to divide us,’’ he said.
It may be mentioned here that Prime Minister Narendra Modi and Home Minister Amit Shah had deputed more than 30 Union Ministers to Jammu and Kashmir as part of the Central Government’s biggest ever public outreach programme in the Union Territory of J&K from January 18-24 during which they visited different district, tehsil and block headquarters and had extensive interaction with the Block Development Council (BDC) Chairpersons, Panchayat members, officials and officers of the administration and common man.
The Ministers are now scheduled to submit report to the Home Minister after which the Centre would initiate follow up action to address issues raised by the people and their representatives with the visiting Ministers across the Union Territory.
Asserting that youth of the country are brimming with self confidence and ready to face every challenge, Modi said the exam season has arrived, and obviously all the students will be busy giving final shape to their preparations.
“After my experience with millions of students of the country through the platform of ‘Pariksha Pe Charcha’, I can say with confidence that the youth of the country is brimming with self-confidence and is ready to face every challenge,’’ he said, adding on the one hand, we are facing examinations; on the other, there is the winter season.
However, he urged the youth try and keep fit.
“Do some exercises or play a little! Sports and games are the key to keeping fit. By the way, these days, I see that many events pertaining to ‘Fit India’ are being organized. On January 18, our young friends organized a Cyclothon throughout the country. Millions of countrymen participating in this Cyclothon spread the message of fitness. Efforts to ensure that our New India remains fit that are evident at every level fills us with fervour & enthusiasm,’’ Modi said.
He added that the ‘Fit India School’ campaign, which started in November last year, is also bringing results.
“I have been told that till date, more than 65,000 schools have obtained the ‘Fit India School’ certificates through online registration. I urge the rest of the schools in the country to integrate physical activity and sports with education and ensure that they become a ‘fit school’. Also concomitantly, I appeal to all countrymen to promote more physical activity in their daily routine. Remind yourself every day that if we are fit, India is fit,’’ the Prime Minister asserted.
He also referred to recent celebrations of festivals like Lohri, Pongal etc.
“A couple of weeks ago, different parts of India were celebrating a variety of festivals. When Punjab was spreading the warmth of enthusiasm by celebrating Lohri, sisters and brothers of Tamil Nadu were celebrating Pongal and birth anniversary of Thiruvalluvar. Assam was aglow with the fascinating lustre of Bihu. In Gujarat, everywhere you could see kites in the sky and the pomp of Uttaraayan,’’ Modi said.