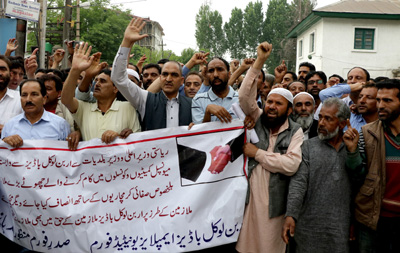 Excelsior Correspondent
Srinagar, May 12: The employees of Urban Local Bodies held a protest demonstration here today for no response  of the authorities towards their demands and genuine issues.
Scores of employees assembled here today under the banner of J&K Urban Local Bodies Employees United Forum and tried to march towards the Chief Minister’s residence but the police personnel foiled their march and detained various employees.

Click here to watch video
The employees were protesting against the authorities for their demands which includes implementation of revised pay rules (SRO 193) and removal of Accounts Officer.
Manzoor Ahmad Pampori, president J&KEUF said that the revised pay structures should be implemented to the employees of Urban Local Bodies especially, the sweepers who are facing tremendous destitution.
“The orders of devolution released on the previous rates should be amended immediately and the additional funds to meet the expenditure on account of enhanced pay be released without any delay,” he said
The employees threatened that if their demands are not addressed, they will be forced to come on roads and stall the sanitation and other services in all the towns of Kashmir.

Days ahead to be prosperous for J&K: BJP