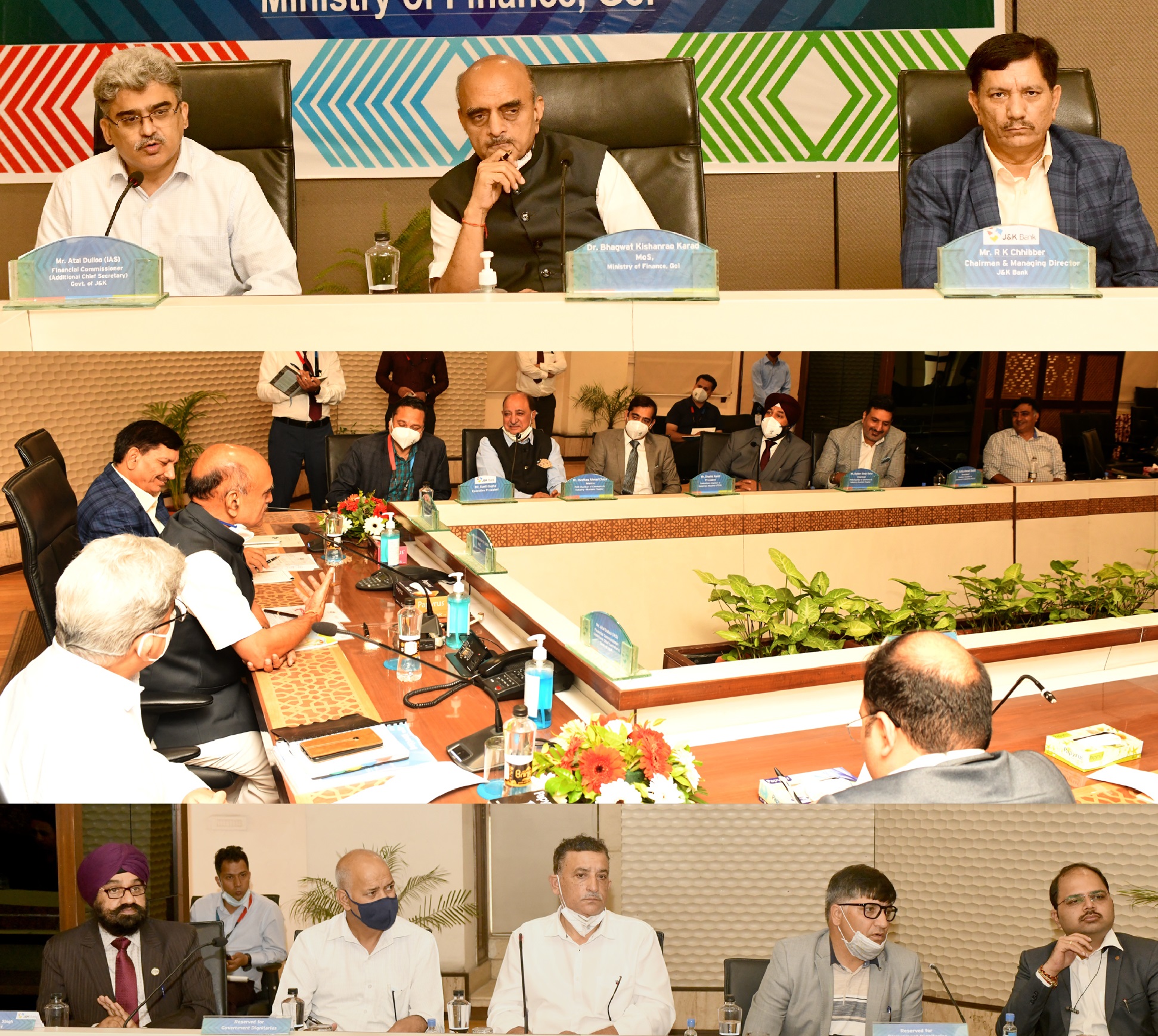 SRINAGAR, Sept 21: Union Minister of State for Finance, Bhagwat Kishanrao Karad visited J&K Bank headquarter and interacted with Bank’s CMD R K Chhibber along with the senior management. Acknowledging the Bank’s vital role in the overall economic development of J&K, Bhagwat expressed satisfaction over the Bank’s recent performance and overall functioning.
Speaking on the occasion, Bhagwat Kishanrao Karad said, “Our Prime Minister is very concerned about business and its progress across the country and we have clear instructions to hear from businessmen in J&K. I am happy to see that J&K Bank is doing a wonderful job here”
“J&K is gifted with natural resources. Having a great scope for Ayurveda medicines and other products, the aspiring entrepreneurs of the valley should take advantage of the schemes that the concerned union ministry has devised for the sector,” he added.
The Union Minister also held a meeting, facilitated by the Bank, with a delegation comprising of members representing valley’s prominent industry associations in presence of Additional Chief Secretary Finance, Atal Dulloo and J&K Bank CMD R K Chhibber at the Bank’s corporate headquarters. DG Budget, M Y Itoo, Commissioner State Taxes Showkat Ajaz Bhat, and Director Resources Finance Dept Showkat Hussain Mir and senior management officials of the Bank were also present on the occasion.
Briefing the Minister about the Bank’s history, CMD R K Chhibber highlighted the Bank’s systemic role in the overall economic functioning of the region besides emphasizing upon its major contribution in the financial transformation of J&K and Ladakh for over eight decades.
He said, “Bank’s foundations are fundamentally strong because of the huge emotional equity of the people of the region besides the continued support and guidance of its promoter and major stakeholder i.e. UT Government. We have been playing instrumental role in the implementation of Union Government’s flagships programs like Financial Inclusion under Prime Ministers Jan Dhan Yojna, PM Mudra Yojana, and other Social Security Schemes and more recently during the Covid19 pandemic we have contributed majorly in implementing the Finance Ministry’s GECL Scheme under Atmanirbhar Bharat Abhiyaan.”
Additional Chief Secretary Finance, Atal Dulloo said that the government was formulating various schemes to help the local businesses. “Owing to Covid19, 1350 Cr rehabilitation package was announced by UT Government to revive businesses in J&K which included 5% interest subvention besides certain waivers of PDD and PHE dues. GST reimbursement is also being done regularly”, he said.
Besides thanking the minister for patient listening, the business delegation commended the Bank’s management especially CMD for providing them the platform to express their views and convey concerns to the visiting dignitary in a very free and frank manner.