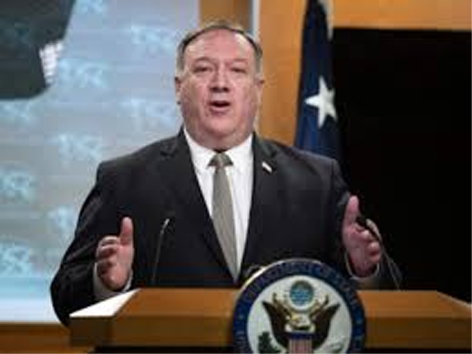 Washington, Sep 24: US President Donald Trump wants a relationship with China that is fair and balanced and where one nation does not threaten another, or another set of countries’ livelihoods, US Secretary of State Mike Pompeo has said, asserting that it is “imperative” to flip the nature of the ties with Beijing to get on equal footing.
The ties between the US and China strained after Trump launched a trade war with China in 2018, demanding Beijing to reduce the massive trade deficit, which was USD 375.6 billion in 2017.
It suffered another blow due to the coronavirus pandemic. Trump has repeatedly called coranavirus as “China virus” and blamed Beijing for mishandling the outbreak. China, however, has denied the accusation.
“We have to fundamentally use the set of tools we have, the power that the United States has to simply demand a set of fair and reciprocal relationships in every dimension with China,” Pompeo said in an exchange with Wisconsin State Senator Roger Roth at the Wisconsin State Capitol on Wednesday.
“I get asked another element of this question. It’s, ‘Well, what does President Trump want this to look like? What does the relationship look like five, 10, 15, 20 years from now?’ And the answer is it looks like a relationship that is fair and balanced and where one nation doesn’t threaten another, or another set of countries’ livelihoods. And so that’s what we’ve been driving towards,” he said.
The US welcomes it when China shows up and competes on a fair and equitable basis and is a supplier to a company, he said.
“But what we see in far too many cases is the flip side of that, which is an inequitable relationship, people who won’t respect property,– where there’s no remedy, there’s no judicial remedy for these wrongs, and it is a predatory activity that is just simply unacceptable to allow to continue,” he alleged.
Pompeo said that the theory that former President Richard Nixon and his Serretary of State Henry Kissinger had become a good friend with China may have been the right thing for the early 1970s and it may well have been worth trying through the 80s and 90s, but it did not deliver the goods for America.
“But we know that it didn’t deliver for the American people because you can see the tens of millions of jobs lost as a result of intellectual property (theft) … and forced technology transfers that have had to take place from businesses right here in Wisconsin,” he said.
The top American diplomat said that more trade, increasing activity is unlikely to do anything but fuel the Chinese capacity to continue that kind of inequitable and oppressive behaviour.
Before Trump, the trade relationship with China was unequal. The Chinese Communist Party managed to convince the world that they’re still a developing nation. They get the enormous advantages that come from being a developing nation inside the WTO, he said.
“So, the President set about trying to identify the tools that we had available to turn the course, to change the nature of the relationship, the trade and economic relationship between the United States and China,” Pompeo said.
He said the first effort was to reach out to the Chinese and say the US wants to negotiate a fair and equitable and reciprocal trade agreement, and so set about it from the beginning.
It did not make a lot of progress, Pompeo acknowledged, adding that so President Trump began to use America’s economic power through the tool of tariffs to impose real cost on Chinese businesses.
“He is mindful that had an impact on American business as well, to the good for some, to the detriment of others,” he said.
“We have to flip the nature of the relationship; it’s imperative. We have to get on equal footing. And if there are costs in the short run, I am convinced that most Americans are prepared to say, ‘I’ll do that’. That’s the right thing to do. It’s the right thing to do for freedom, democracy,” Pompeo said.
“It will ultimately be the right thing to do for their business as well. And so we’ve tried to ameliorate the harms to small and medium businesses here in the near term for what will be an enormously important strategic shift which will benefit every American business from the smallest business to medium-size businesses, and to the larger businesses that are operating on a global scale, where they’ll have the real opportunity tactically to compete on a fair and level playing field,” he said.
“That’s the mission set. That’s the purpose of the tariffs. The President’s been very clear he’d love to live in a world with no tariffs, no trade barriers wide open, let the finest compete,” Pompeo said. (PTI)