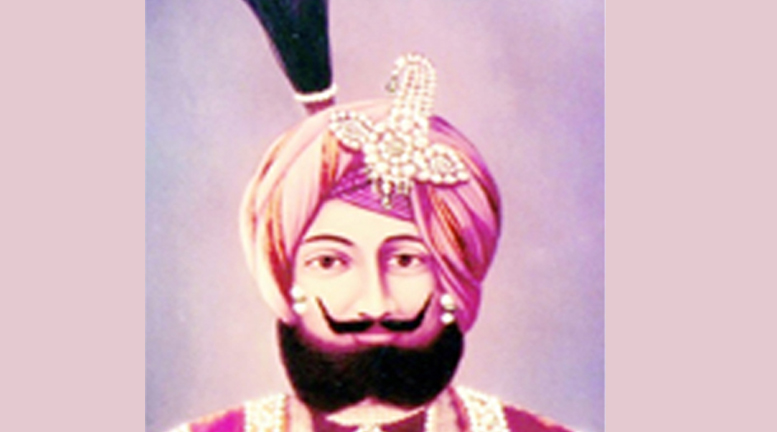 Col J P Singh
Maharaja Gulab Singh was the founder and first Maharaja of Jammu and Kashmir during the British Rule. He founded a dynasty that was to rule the State, the largest kingdom in British India, until India gained its independence in 1947.
Gulab Singh was born at Anderwah, near Samba, on 21 October 1792. His father, Mian Kishore Singh, was a kinsman of Raja Jit Singh, the ruler of Jammu. In 1808, as a 16 year old youth, Gulab Singh fought alongside his clansmen in defending Jammu unsuccessfully against a Sikh invasion. Following this defeat, the Raja of Jammu got internal autonomy of the principality, which became a tributary of the Sikh empire. Later Gulab Singh enlisted in Emperor Ranjit Singh’s army, soon becoming the commander of a Dogra Cavalry Contingent. His father and brothers Mian Dhian Singh and Mian Suchet Singh also joined Lahore Darbar as courtiers and distinguished themselves. Gulab Singh remarkably distinguished himself in several campaigns, including the conquest of Multan in 1816. He also led an independent campaign in 1816 to conquer the hill kingdom of Reasi.
In 1816, following another conflict, Jammu was annexed by Sikh Ruler Ranjit Singh. Raja Jit Singh was expelled from the State. He found refuge in British India. Emperor Ranjit Singh appointed a Sikh Governor to administer the newly conquered area which was expanded in 1819 with the annexation of Kashmir. In 1820, in appreciation of services rendered by the family, and by Gulab Singh in particular, Ranjit Singh bestowed the Jammu region as a hereditary fief upon Kishore Singh, illustrious father of Gulab Singh. In 1821 Gulab Singh conquered Rajouri from Aghar Khan and Kishtwar from Raja Tegh Muhammad. Same year, Gulab Singh took part in the Sikh conquest of Dera Ghazi Khan.
Raja Kishore Singh died in 1822 and Gulab Singh was confirmed as Raja of Jammu by his Suzerain, Maharaja Ranjit Singh. The Raj Tilak Ceremony was performed by the Emperor Ranjit Singh himself at Jeo Pota (Northern bank of River Chenab) Akhnoor on 17 June 1822. Shortly afterwards, Gulab Singh secured a formal declaration of renunciation from the deposed Raja Jit Singh. The declaration reads:
“I, Raja Jit Singh, grandson of Raja Sahib Ranjit Devji, on this occasion and out of internal inclination and dignified favors, in my own lifetime, and as a token of intrinsic love and heartfelt affection, hereby renounce proprietorship to all the protected territories of my ancestors, and my own inheritance, in favor of my prosperous barkhurdar, Raja-i-Rajgan Raja Gulab Singhji, and Raja Sahib Dhian Singhji and Raja Suchet Singhji, by way of dharam and niyam, mutual agreement and on oaths of my predecessors and Thakurs and Gurus.”
This declaration transferred the rule of Jammu from Raja Jit Singh to Gulab Singh.
In 1824, Gulab Singh captured the fort of Samarth, near the holy Mansar Lake. In 1827, he along with the Sikh Chief Hari Singh Nalwa, fought and defeated a horde of Afghan rebels led by the fanatic Sayyid Ahmed at the Battle of Saidu. Between 1831-39, Maharaja Ranjit Singh bestowed on Raja Gulab Singh the royalty of the salt mines in Northwestern Punjab and Gujarat.
On the death of Maharaja Ranjit Singh in 1839, Lahore became a center of conspiracies and intrigues in which Jamwal brothers became involved. They succeeded in installing Kharak Singh as ruler but placed the administration in the hands of Prince Nao Nihal Singh with Raja Dhian Singh as prime minister. However in 1840, during the funeral procession of Maharaja Kharak Singh, Prince Nao Nihal Singh died when an old brick gate collapsed on him. Gulab Singh’s son Udham Singh also died in this accident. (Udhampur town is named after him).
In January 1841, Sher Singh, reputed son of Ranjit Singh, tried to seize the throne of Lahore but was repulsed by those loyal to Nao Nihal’s mother, Rani Chand Kaur. The defense of the fort then was in the hands of Raja Gulab Singh. After peace was made between the two sides, Gulab Singh and his men were allowed to leave with their weapons. Rani Chand Kaur accompanied Raja Gulab Singh to Jammu. Subsequently, Gulab Singh conquered the fort of Mangla (near the present Mangla Dam in Pakistan on the Jhelum River).
All this while a large part of the Dogra Army had been engaged in trans-Himalayan conquests. Gen Zorawar Singh, Governor of Kishtwar, had conquered the entire Ladakh in 1835-36 and Gilgit-Baltistan in 1840. These conquests alarmed Lahore ruler. The Dogra campaign in the Northwest threatened the Sikh position in Kashmir and hence Gen Zorawar Singh turned his attention towards East to the conquest of Tibet.
For full text see https://www.dailyexcelsior.com/sunday-magazine/

In May 1841, 5000 strong Dogra army supplemented by contingents of Kishtwaris, Ladakhis, and Baltis, raising its strength to 7000, advanced Eastwards in three divisions. Overcoming all the Tibetan and Chinese opposition they set up a base at Taklakot near the holy Mansarovar Lake in September 1841, after traversing a distance of 450 miles from the Indian frontier. With the onset of severe winter, the Dogras began falling one-by-one to the extreme cold and the lack of provisions. Despite giving good account of their bravery, they were overcome by a joint Sino-Tibetan force on 12 December 1841. Gen Zorawar Singh died fighting the Chinese. Survivors of this campaign crossed over the Himalayas South to the British territories. Raja Gulab Singh, who was then in Peshawar leading the Anglo-Sikh campaign in Afghanistan, was informed of this disaster by Henry Lawrence.
The Tibetans and their Chinese allies then invaded Ladakh but were defeated by the Dogras at the Battle of Chushul. The boundary between Ladakh and Tibet was finally settled by the ‘Treaty of Chushul’.
Meanwhile in the continuing intrigues at Lahore, the Sandhawalia Sardars (related to Maharaja Ranjit Singh, but allied to the British) murdered Gulab Singh’s brother, then prime minister, Raja Dhian Singh and Maharaja Sher Singh in 1842. Subsequently Gulab Singh’s youngest brother, Suchet Singh, and nephew, Hira Singh, then prime minister of infant Maharaja Daleep Singh, were also murdered.
As the administration collapsed, the Khalsa soldiery clamored for the arrears of pay. In 1844 the Lahore court commanded an invasion of Jammu to extract money from Raja Gulab Singh, reputed to be the richest Raja North of the Sutlej River. However the invasion failed and the Khalsa made peace with Raja Gulab Singh and agreed to negotiate on his behalf with the Lahore court. These negotiations imposed an indemnity of 27 lakh Rupees on the Raja. In the subsequent Anglo-Sikh wars, Gulab Singh kept himself neutral. Under the Treaty of Lahore, the defeated Lahore court transferred Gulab Singh’s kingdom and the adjoining hilly regions of Hazara, Gilgit, Kashmir, and Chamba to the British in lieu of the war indemnity. Lacking the resources to occupy such a large region immediately after annexing portions of Punjab, the British recognized Gulab Singh as Maharaja of Jammu and Kashmir on payment of 75 Lakh of the war indemnity. But the angry courtiers of Lahore, particularly, Lal Singh, incited the Governor of Kashmir to rebel against Gulab Singh which had to be defeated by him.
Maharaja Gulab Singh’s rule over entire Jammu and Kashmir was formalized in the Treaty of Amritsar dated 16th March 1846. The treaties of Chushul and Amritsar defined the borders of the Kingdom of Jammu and Kashmir in the East, South and West but the Northern border was still undefined. In 1850 the fort of Chilas, in Dardistan, was conquered. Gilgit was lost to rebellion in 1852 but was recovered ten years later by his son.
Maharaja Gulab Singh himself anointed his son Ranbir Singh in 1856 and acted as his advisor till death on 30th June 1857. Creation of an empire of the size and magnitude in the most inhabitable terrain in the Northwest of India is unparalleled in the world history. Raj Tilak Celebration Committee, led by Th. K P Singh, celebrates this historic chapter of Indian history on 17 June every year at Jeo Pota as a public function to commemorate sacrifices of Dogras, Ladakhis and Baltis in creation of unique Jammu and Kashmir empire.