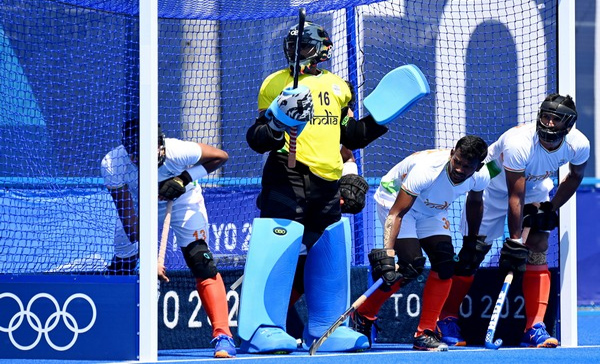 TOKYO [Japan]: India men’s hockey team got off to a flying start at the Tokyo 2020 Olympics after edging out New Zealand 3-2 at the Oi Hockey Stadium — South Pitch here on Saturday.
Harmanpreet Singh scored the brace for India while Rupinder Pal Singh scored against the Kiwis. But it was the safe gloves of experienced goalkeeper PR Sreejesh who ensured the team gets off to a winning start in the campaign.
India started the match on the front foot with Rupinder Pal Singh rattling the crossbar by unleashing a fierce shot on a penalty corner. But it was the Kiwis who converted their chances as penalty corner expert Kane Russell put the ball right in the corner and high past Sreejesh inside eight minutes.
Rupinder soon showed his class as the star drag-flicker converted a penalty stroke — which team won after a penalty corner — and put India back level in the match. Sreejesh then made a very crucial save off a penalty corner in the dying minutes of the first quarter to keep the score 1-1.
In the second quarter, India’s defenders didn’t give the Kiwi forwards much gap to utilise. And with 5 minutes to go, a smart review from the team resulted in a PC. Harmanpreet Singh made no mistake as he completed a nicely worked routine with Rupinder Pal to smack the ball low and between the keeper’s legs. India took the lead for the first time in the match.
The duo of Harmanpreet and Pal came clutch for India again in the third quarter as Harmanpreet scored his second goal of the match through another great PC. New Zealand clearly weren’t done yet as Stephen Jenness found the narrowest of angles to make it 2-3 for the team.
Fourth-quarter as expected went back and forth but it was the Indian defenders who kept the Kiwi forwards at bay and came out on top. Sreejesh made some great saves in the dying minutes of the match to stop NZ from creating any late upset.
The Indian team is pooled with Australia, Argentina, India, Spain and New Zealand in Group A. Belgium, Netherlands, Germany, Great Britain, Canada, and South Africa have been placed in Pool B.
The current league phase will take place until July 30, which will be followed by the quarterfinals and semifinals on August 1 and 3, respectively. The bronze medal and gold medal matches are slated to be held on August 5. (Agencies)