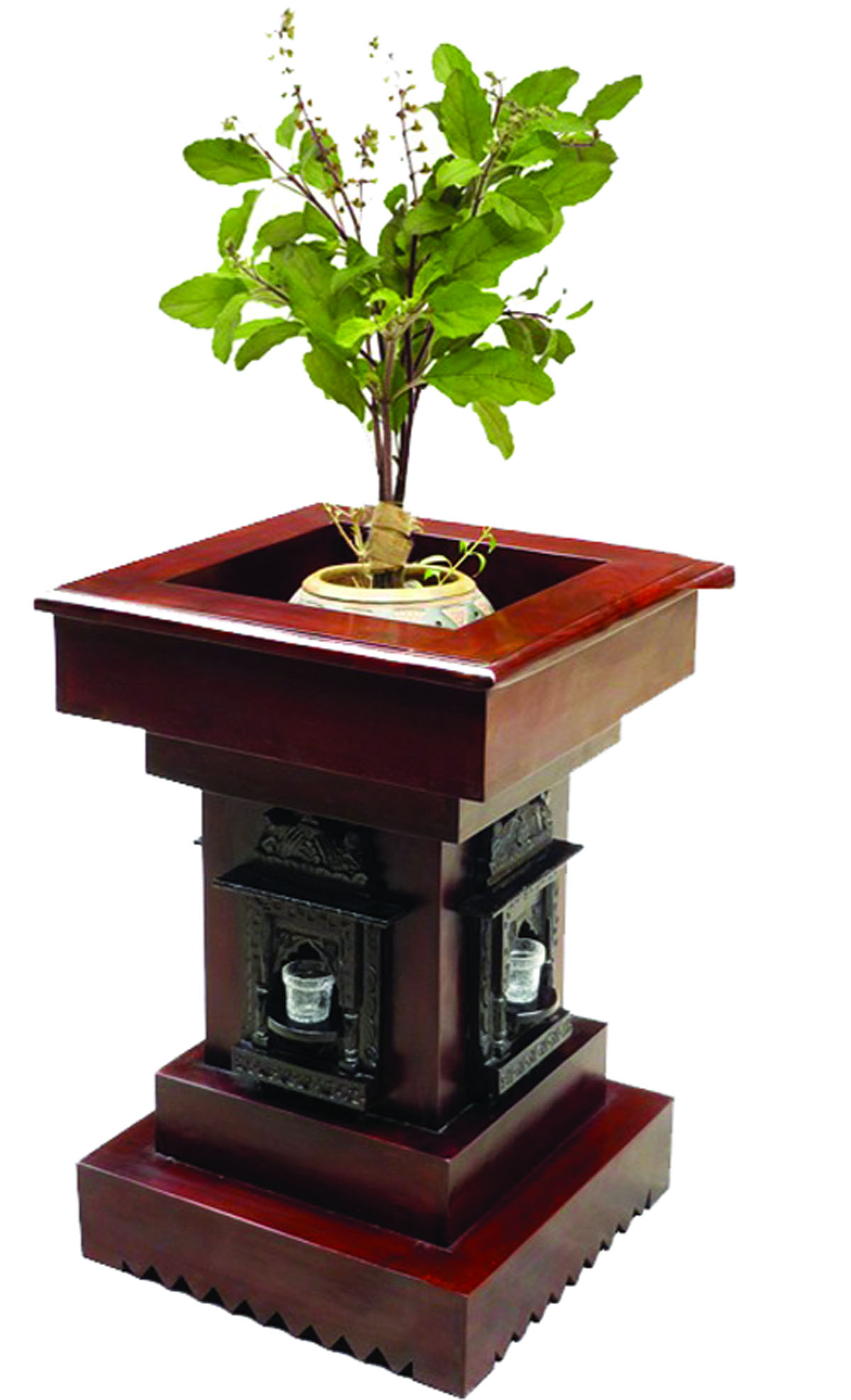 R.C. Kotwal
Tulsi (Ocimum Tenniflorum) or Holy Basil is a highly scared plant in Hinduism for thousands of years, it is often called as Consort of the God Vishnu. Majority of Hindus have tulsi plants growing in front or near their homes. This plant is cultivated for religious and medicinal purposes and for its essential oil. In Hinduism, Tulsi means ” matchless” and is known as Vasihnavi (belonging to God Vishnu). Tulsi with green leaves is called Sri – Tulsi (Fortunate Tulsi) and Sri is a synonym for Lakshmi, the principal consort of God Vishnu. This variety is also known as Rama -Tulsi. The Tulsi plant with purple leaf and dark stem is called Shyama -Tulsi ( Dark Tulsi) or Krishna Tulsi.  This variety is considered especially sacred to Krishna, its purple colour is similar to Krishna’s dark complexion.
Four types of Tulsi mentioned in Ayurvedic tests.
* Rama Tulsi (Green Leaf) /Ocimum Tenniflorum.
* Krishna Tulsi (Dark Leaf /dark stem) /Shyama Tulsi.
* Vana (Wild Leaf) Tulsi.
* Kapoor Tulsi (Heavy Flowered)
Bhagavata Purana regards Tulsi as an manifestation of Lakshmi, the goddess of wealth and principal consort of God Vishnu. While Tree (Nature) worship is not uncommon in Hinduism, the Tulsi plant is regarded the holiest of all plants. A traditional prayer tells us that the creator God Brahma resides in its branches, all Hindu pilgrimage centers resides in its roots, the Ganges flows through its roots, all deities in its stem, leaves and Hindu scriptures – the Vedas in the upper part of its branches. Every part of the Tulsi plant is revered and considered sacred. Even the soil around the plant is holy. The Padma Purana declares a person who is cremated with Tulsi twigs in his funeral pyre gains moksha and a place in Vishnu’s abode Vaikuntha.
According to recent sources, a group of researchers from Central University of Punjab, Bhatinda have found that Tulsi is a native to North central India and has been cultivated here for more than 5000 years. It was thoroughly familiar to the Greek authors also. It is a half- hardy annual plant, best known as a culinary herb prominently featured in Italian cuisine. There are many varieties of ocmium basilicum, as well as several related species or species hybrids also called Basil. The type used in Italian food is typically called sweet Basil, as opposed to Thai Basil, Lemon Basil and Holy Basil which are used in Asia. While most common varieties of basil are treated as annuals, some are perennial in warm, tropical climates, including Holy Basil and a cultivator known as African Blue. The word basil comes from Greek word meaning “King”.  There are many rituals and beliefs associated with basil. The French sometimes called Basil Royal Herb while Jewish folklore suggests it adds strength while fasting. In Portugal dwarf bush basil is traditionally presented in a pot to loved ones on the religious holidays of Saint John and Saint Anthony.
Tulsi plant is widely grown in the Gir Wild Life Sanctuary and Sasangir National Park in India. Tulsi grows wild in tropics and warm regions. Tulsi seeds are watered from time to time and germinate in one to two weeks. Tulsi prefers rich soil for its growth. It requires full sunlight. It mainly grows in temperate climate.
Some interesting facts and uses of this wonder plant:
* Tulsi leaves boiled in water, along with cardamom is said to bring down fever.
* Tulsi is a germicide and disinfectant and is said to protect human body from all types of infections.
* Tulsi with honey and ginger is an effective remedy against bronchitis, asthma, influenza and cold.
* When eaten on an empty stomach, it is said to remove kidney stones.
* It also reduces blood cholesterol levels, Tulsi contains vitamin C and other anti – oxidants such as engenol which protects the heart from harmful effects of free radicals.
* Warm Tulsi juice gets rid of stomach worms.
* Tulsi fights with bad breath, pyorrhea and cavities and other dental problems.
* Tulsi scavenges free radicals in the body, so a large group of researchers believe that it has the potential to fight cancer.
Mere taking of one green fresh leaf daily has shown extra ordinary magic effects on the health of anyone who takes it on regular basis. Scientific tests conducted in India so far have given valid results and more so Tulsi plant has no side effects. Recent experimental studies have shown that Tulsi plant has shown effective treatment for diabetes by reducing blood glucose levels. Some studies have also shown reduction of total cholesterol levels if used properly. It has also shown analgesic action on human bodies. Tulsi must be taken 1-2 ml two times daily in most cases or as suggested by experts. Moreover at times it is not recommended in pregnant or breastfeeding women. Most studies of the Holy plant is based on scientific studies (Human, animals or in- vitro), clinical experience or traditional usage. In the end, the use of plants and plant products could be traced as far back as the beginning of human civilization. The earliest mention of medicinal use of plants in Indian culture is found in “Rig Veda” which is said to have been written around 5000 B.C and is supposed to be oldest repository of human knowledge.
(The author is Superintendent of Police, Jammu)