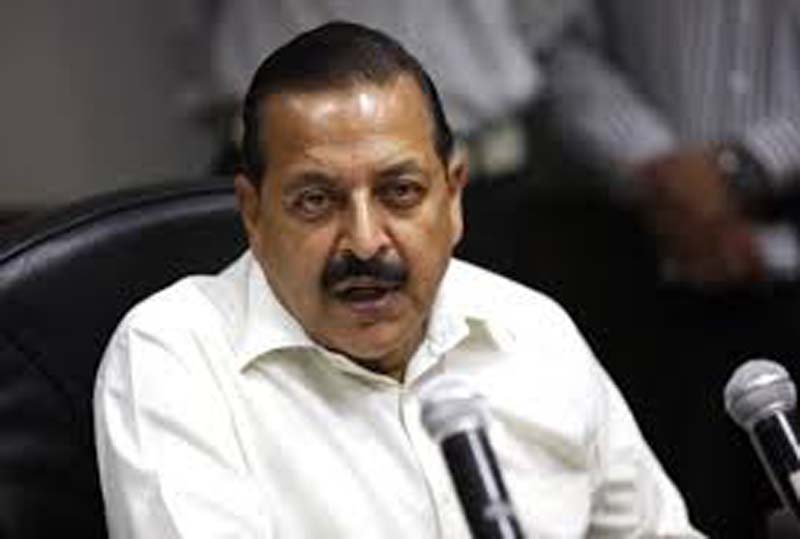 ‘Bunkers will be constructed in time bound period’

Avtar Bhat
KATRA, July 14: Maintaining that terrorism will die its own death in Kashmir valley, Union Minister of State in PMO with independent charge of North Eastern States, Dr Jitendra Singh today said that terrorism will vanish from the soil of Valley by this year.
Addressing a function here in connection with donation of an ambulance and a mortuary van by National Hydroelectric Power Corporation(NHPC) under its corporate social responsibility to District Red Cross Society Reasi, Dr Jitendra Singh said the days are not away when there will be total peace in Kashmir Valley as the general masses are fed up with three decade long gun culture now.
He said the terrorists are on run as they are facing the heat of security forces who have been given free hand by Modi Government in tackling the situation. Dr Jitendra Singh said common masses are not cooperating with the separatists as they have seen through their game plan who exploited them and their children by diverting them to anti national activities while sending their own wards for prime educational institutions and professional colleges outside the Valley and abroad.

He said the changing situation in the Valley can be gauged from the fact that huge number of youth joined the recruitment rally in Valley recently.
Dr Jitendra Singh said there is a realization among the common masses in Kashmir that the separatists as well as mainstream parties have developed a vested interest in turmoil by making the common Kashmiri a scapegoat. The separatists and mainstream parties are enjoying at the peril of common man which they (common Kashmiris) are not going to tolerate any more now.”
The Minister said that people of Kashmir want to take the benefit of welfare schemes of Narendra Modi Government which is committed to “Sabka Sath, Sabka. Vikas and Sabka Vishwas” and the Government will strictly stick to this policy to give the due to those people who remained neglected over the years. “We want to give equal treatment to people irrespective of their caste, creed, religion or region”, he added.
He said people in Kashmir have come to know that BJP is not untouchable for them as it wants the development of those areas which were deprived and neglected during past 70 years.
Dr Jitendra Singh exuded confidence that changing situation in Kashmir will also have a good impact on the other two regions of the State also.
Dr Jitendra Singh also reiterated the Union Home Ministry’s commitment that the construction of 15000 bunkers in border belt will be completed in a time bound period. He said earlier former Home Minister, Rajnath Singh had made a commitment in this regard and now the present Home Minister Amit Shah also gave an assurance in this regard on floor of Parliament recently.
Later talking to reporters, Dr Jitendra Singh in response to a question that NC president, Dr Farooq Abdullah called Satya Pal Malik as BJP Governor and BJP State president, Ravinder Raina had also said that Malik is BJP Governor, Dr Jitendra Singh said Governor is as much of Ravinder Raina as that of Dr Farooq Abdullah.
He also unfolded the next five year policy programmes of Modi Government for the welfare of people and reiterated that in last five years, the Government launched various flagship projects and programmes for the benefit and welfare of the people.
He said in Reasi district there is a vast far off and under developed area and main thrust needs to be given for the development of those areas which have remained neglected till date.
He highlighted the salient features of Ayushman Bharat launched by Narendra Modi Government and said people from 16 -17 and 70-80 age group took its advantage. The J&K is ahead of other states in Ayushman Bharat, he added.
He said the CRF and other schemes be framed by Sarpanches and not the MLAs and MPs to maintain transparency. He added the Shiv Khori plan will be through soon and more colleges and schools will be upgraded in the State.
He also announced that village hats in Kathua and Udhampur will be joined with holy city of Katra.
He also highlighted the Modi Government’s policy of providing safe drinking water to every house hold in the country during next five years.
Meanwhile, Dr Jitendra Singh formally handed over the keys of the two vehicles to Deputy Commissioner, Indu Kanwal Chib at a function organised by NHPC at Spiritual Growth Centre here.
Chief General Manager, Salal Power Station, Himanshu Shekhar was present during hand over of the keys.
Former Minister, Ajay Nanda, former MLA Baldev Raj Sharma, SSP, Reasi and prominent businessman Shiv Kumar Sharma and others were also present on the occasion.