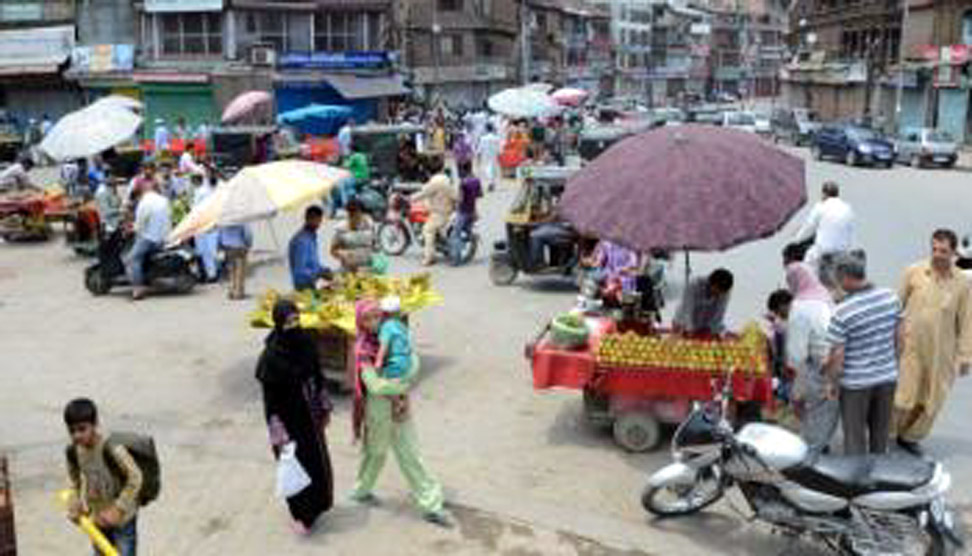 Security beefed up after grenade attack
SRINAGAR, Oct 13: Hundreds of vendors have put up stalls in the weekly ‘Sunday market’ in the heart of summer capital, Srinagar, attracting huge rush of customers after remaining affected due to the strike for nine weeks.
The vendors put up stalls on the road stretch from Radio Kashmir to Lal Chowk, the nerve centre of the summer capital, despite all shops and business establishments remaining closed for the 70th day today.
The famous market was affected for 10th successive week due to the strike against scrapping of Articles 370 and 35 A on August 5. Even though vendors had setup few stalls during the last couple of weeks, the number of customers was very less due to non-availability of public transport.
However, good number of customers have turned up today in the market to buy goods, ranging from shoes to warm clothes. “The number of customers has increased though it is still less as compared to the usual number of people, who throng to the market. Only those people who have their private transport have been able to come to the market while those who rely on public transport remained away,” a vendor, selling shoes said.
The vendor said he had put up stall last week in the market, but the number of customers turning up was very disappointing. “Today I was reluctant to set up a stall, but fortunately the customers have come in good numbers to make purchase,” he added.
A customer Shabir Ahmad, a resident of uptown Srinagar, said he had come to purchase warm clothes for his family, but expressed disappointment over fewer verities available in the market. “Sunday market is the best option as good quality goods are sold with economic rates. People have no option but to make purchases of good, particularly warm clothes, as the winter is approaching,” he added.
The famous weekly market usually attracts thousands of customers from different parts of the Valley. Business worth crores of rupees is done every week in the market in which goods, ranging from a hairpin to carpets, are sold on economical rates.
Meanwhile, security was beefed up in several areas of Srinagar – the summer capital of Jammu and Kashmir – on Sunday following a grenade attack by suspected militants in a city market that left seven people injured, police said.
More security personnel, along with the flying squad, were deployed in Lal Chowk, Jehangir Chowk, Hari Singh High Street, Regal Chowk, TRC Chowk, Polo View and the areas around the city centre, a police official said.
He said random checking of vehicles and frisking of people was being done as part of the security drill.
The deployment of more security personnel was done in the wake of a grenade attack in Hari Singh High Street market – a few hundred metres from the city centre – on Saturday in which seven people were injured, the official said.
He said the authorities wanted to give a sense of security to the people and the vendors who had set up stalls for the weekly flea market on Sunday.
Meanwhile, normal life remained hit in Kashmir for the 70th consecutive day today since the abrogation of Article 370 of the Constitution as the main markets continued to be shut and public transport stayed off the roads, even as the weekly flea market here was open, officials said.
Auto-rickshaws and a few inter-district cabs were seen plying here, but other modes of public transport were off the roads, the officials said, adding that the movement of private cars was less as compared to Saturday. (Agencies).