Excelsior Correspondent
JAMMU, Nov 10: J&K State Judicial Academy today organized an orientation programme on “Transition from State Laws to Central Laws in the backdrop of Implementation of Reorganisation Act, 2019” for Civil Judges (Senior/Junior Division)/ Chief Judicial Magistrates/Magistrates serving in Jammu province.
The objective of the orientation programme was to give insight to the participants into the provisions in the Jammu and Kashmir Reorganization Act and Order issued by President for removal of difficulties, for smooth transition from the repealed State Laws to the extended Central Laws.
Director, J&K State Judicial Academy made PowerPoint presentations on the impact of the Reorganization Act, the difficulties arising under the Act and the implementation of Central Acts, and the effect of the Order regarding removal of difficulties issued on 30th October, 2019.
The participants highlighted number of difficulties which they had felt during the initial phase of application of the Central Laws. Their doubts and difficulties were cleared in the light of the Order regarding removal of difficulties.
It was discussed that any right, privilege, obligation or liability acquired, accrued or inquired under the repealed State Laws shall be governed in accordance with the provisions of the repealed Act irrespective of the application of Central Laws. Any penalty forfeiture or punishment incurred in respect of any offence committed against any repealed State law shall continue to be dealt in accordance with the provisions of the repealed State Laws. Any investigation, legal proceeding, remedy in respect of any such right, privilege, obligation, liability and penalty etc. shall also be governed in accordance with the provisions of the repealed Act.
The participants were apprized that the investigation, inquiry or trial in respect of any offence committed before 31st of October, 2019 shall have to be conducted and completed in terms of the provisions of the repealed J&K Code of Criminal Procedure. Only in respect of those offences which are committed on or after 31st October, 2019, the new penal laws and procedural law shall be applicable.
It was also discussed that statutory authorities constituted under the repealed Acts before 31st October, 2019 shall continue to function and are deemed to have been constituted under the Central Laws and any proceedings initiated or action taken by such authorities is validated under the Central Laws.
The Central Laws which were otherwise also applicable in the State of Jammu and Kashmir shall continue to be applicable in the two Union Territories. That apart, all the Central Laws which were applicable in rest of India and not in the State of Jammu and Kashmir now have been applied to the two Union Territories under the Order regarding removal of difficulties. The removal of difficulties order would pave the way for smooth transition from the State Laws to the Central Laws. 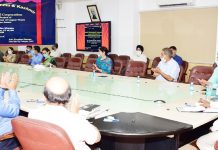