E-Paper
Home Todays story SC leaves it to Parl for law to bar criminals from contesting... 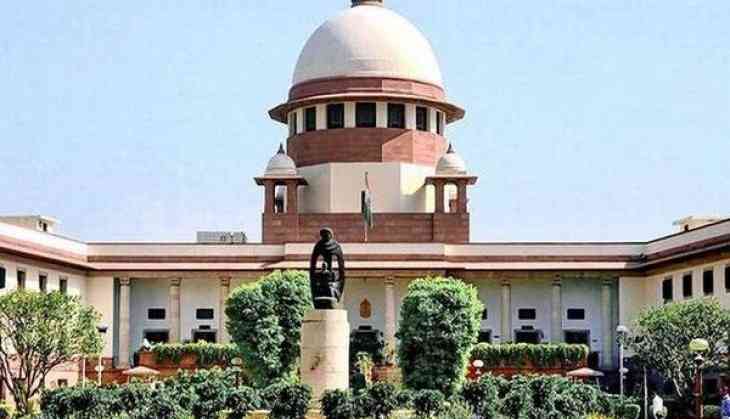 NEW DELHI, Sept 25: Observing criminalisation of politics is a bitter manifest truth and a “termite” to the citadel of democracy, the Supreme Court today left it to Parliament to bar those facing trial for heinous and grievous offences from contesting elections by enacting a “strong law”.
Declining to put a ban on candidates with criminal antecedents from entering the poll fray, which, it said is the domain of the legislature, the court said the law should also make it mandatory for political parties to revoke the membership of candidates facing serious criminal cases.
The court, however, passed a slew of directions to cleanse the “polluted stream of politics”.
One of the directions was that pending criminal cases have to be stated “in bold letters” in the form provided by the Election Commission. The candidate and the political party concerned were also directed to issue a declaration in widely circulated newspapers in the locality and in electronic media about his or her antecedents.
According to the prevalent law, lawmakers stand immediately disqualified and candidates barred from contesting elections if convicted for a crime and sentenced to a jail term of two years or above under the Representation of Peoples (RP) Act.
Warning that “malignancy” of criminalisation of politics can become “fatal” to democracy, the court said the nation was “eagerly” waiting for a legislation as the society has legitimate expectation to be governed by proper constitutional governance and citizens cannot be compelled to stand as “silent, deaf and mute spectators” to corruption by projecting themselves as helpless.
Holding that criminalisation of politics is an “extremely disastrous and lamentable situation”, a five-judge Constitution bench headed by Chief Justice Dipak Misra in its unanimous verdict said this “unsettlingly increasing trend” has the propensity to “send shivers down the spine of a constitutional democracy”.
“A time has come that the Parliament must make law to ensure that persons facing serious criminal cases do not enter into the political stream.
“We are sure, the law making wing of the democracy of this country will take it upon itself to cure the malignancy,” it said.
The bench said though criminalisation in politics is a “bitter manifest truth”, which is a “termite” to the citadel of democracy, the court cannot make the law.
The 100-page verdict was pronounced on a batch of pleas raising a question whether lawmakers facing criminal trial can be disqualified from contesting elections at the stage of framing of charges against them. The PILs were filed by NGO ‘Public Interest Foundation’, BJP leader Ashwini Kumar Upadhyay and others.
A senior Government functionary welcomed the verdict, saying it seeks to cleanse the polity of criminal elements. He, however, said issues like politically motivated cases have to be considered. The official said the Government will study the order in detail and decide the next course of action.
He pointed out that several of the directions given by the top court have already been implemented, including filing of affidavits by candidates giving details of criminal cases against them.
“Substantial efforts have to be undertaken to cleanse the polluted stream of politics by prohibiting people with criminal antecedents so that they do not even conceive of the idea of entering into politics. They should be kept at bay,” the court said.
The bench, which also comprised Justices R F Nariman, A M Khanwilkar, D Y Chandrachud and Indu Malhotra, said malignancy of criminalisation of politics was “not incurable” but the issue was required to be dealt with soon before it becomes “fatal” to the democracy.
“In a multi-party democracy, where members are elected on party lines and are subject to party discipline, we recommend to Parliament to bring out a strong law whereby it is mandatory for the political parties to revoke membership of persons against whom charges are framed in heinous and grievous offences and not to set up such persons in elections, both for Parliament and the state assemblies.
“This, in our attentive and plausible view, would go a long way in achieving decriminalisation of politics and usher in an era of immaculate, spotless, unsullied and virtuous constitutional democracy,” it said.
The court also referred to the 244th report of the Law Commission and cited its finding that in 10 years since 2004, 18 per cent candidates contesting elections have criminal cases pending against them (11,063 out of 62,847).
“The voters cry for systematic sustenance of constitutionalism. The country feels agonized when money and muscle power become the supreme power,” the bench said, adding it was imperative that persons who enter public life and participate in law making should be above any kind of serious criminal allegation.
Criminalisation of politics strikes at the very root of democracy by making the citizenry suffer at the hands of those “who are nothing but a liability” to the country, it said.
The bench said despite the “heavy mandate” prescribed by the Constitution, India being the world’s largest democracy has seen a “steady increase” in the level of criminalisation that has been creeping into the Indian polity.
The bench also took note of the submissions of Attorney General K K Venugopal that the court should not cross the ‘lakshman rekha’ vis-a-vis the separation of powers and said it was well settled in law that the court cannot legislate. (PTI)