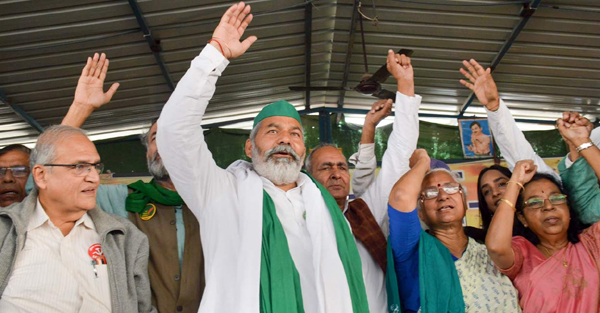 NEW DELHI, Nov 27:
The Samyukt Kisan Morcha has suspended its November 29 tractor march to Parliament and it will hold a meeting next month to decide its future course of action, farmer leaders said today.
The decision to suspend the march comes two days ahead of the commencement of the Winter Session of Parliament, during which a bill to repeal three central farm laws is slated to be introduced.
The Samyukt Kisan Morcha (SKM), an umbrella body of farmer unions protesting against the laws for the past one year, also said it wants an assurance in Parliament on their demand for a legislation guaranteeing farmers Minimum Support Price (MSP) for their crops.
SKM leader Darshan Pal, while addressing a press conference, said, “We are suspending the Parliament march on Monday. We had written to the prime minister for withdrawal of cases against farmers, allotment of land for building a memorial for farmers who lost their lives (during the protest), suspension of Ajay Mishra ‘Teni’ from the Union Cabinet over the Lakhimpur Kheri violence, along with other issues.”
He said that a reply is awaited and SKM will hold another meeting on December 4.
The SKM also demanded that the government should initiate a dialogue with them in a respectful way.
Last week, Prime Minister Narendra Modi had announced that the three farm laws would be withdrawn.
Though farmer unions have welcomed the government’s move, they said their protest would continue until the laws are totally and formally withdrawn and other demands, including legal guarantee of MSP, are met. (PTI)