Excelsior Correspondent
JAMMU, Sept 2: Commissioner Secretary PHE, I&FC Department, Ajeet Kumar Sahu today reviewed the progress of protection works on major rivers/nallahs of the region including Chenab, Tawi, Basanter, Ujh, Ravi and other local nallahs.
Sahu said that the Governor Satya Pal Malik reviewed the flood preparedness and mitigation plan of Jammu in the month of May 2019 and had approved advance flood preparedness works worth Rs 91 crore for Jammu Region.
It was informed in the meeting that Irrigation and Flood Control Department, Jammu had identified more than 250 vulnerable spots for taking up the urgent nature of protection work
The Chief Engineer IFC Jammu, Vinod Kumar Gupta informed that these works were taken up in hand well before the monsoon season which provided relief to the general public from floods in vulnerable areas of Akhnoor, Samba, Kathua and Jammu. He further informed that some of the works have been completed and work on the rest is under execution. The protection works have provided a lot of relief to the general public and saved the agriculture land to a great extent, he added.
The Commissioner Secretary directed the CE to complete the remaining works in all respects soon. He directed all the concerned officers to submit pre-during and post execution photographs of all the works besides ensuring their geo tagging.
Sahu also reviewed status of centrally sponsored schemes of Flood Management Program (FMP) being implemented by IFC Jammu.
It was also informed in the meeting that 13 groups of projects consisting protection works costing Rs. 176.46 crore at more than 300 spots have been taken up under CSS in last 3-4 years. An amount of Rs 52 crore has been earmarked for completion of these schemes this year.
The Commissioner Secretary directed for maintaining high quality of standards in execution of works with third party monitoring and their completion within this financial year itself.
The meeting was attended by Superintending Engineers of Jammu and Kathua circles and Executive Engineers of Flood Control Divisions of Jammu province. 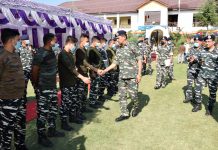 Be ready to respond against any anti national activity: DG CRPF to troops

FD for effective implementation of GeM

Man arrested for trying to outrage modesty of minor