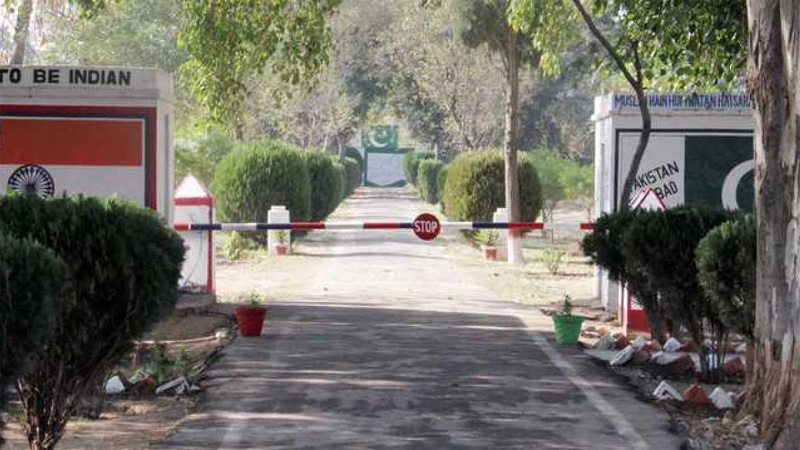 JAMMU, Sept 27:
The chants of ‘Bharat Mata Ki Jai’ and ‘Vande Matram’ are set to be audible in high pitch along the India-Pakistan International Border as the Government has nodded for ‘retreat ceremony’ to attract more tourists at Suchetgarh here in the city outskirts from the month of October.
Developing Suchetgarh on the Lines of Wagah Border in Amritsar, the border dwellers have been demanding the same since decades to boost border tourism in the region. A well organised Parade by the men of country’s largest border guarding force (BSF) will be a regular feature of ‘retreat ceremony’ to be organised at Suchetgarh. “Fulfilling decades old demand of developing Suchetgarh on the Zero Line of the Indo-Pak border on the lines of Amritsar’s Wagah border, the Government has decided to organize a daily ‘retreat ceremony’ from October aiming to promote border tourism,” official sources said. “Although there will be no such ceremony from the Pakistan side like the Wagah border, the Border Security Force (BSF) personnel will organize the ‘retreat ceremony’ daily to attract tourists to the border belt,” he said.
Suchetgarh is the last village in R S Pura tehsil of Jammu district which shares its border with Pakistan.
Distance from Jammu to R S Pura is 17 kms and from R S Pura to Suchetgarh it is 11 kms. Suchetgarh border from Jammu has a total distance of 28 kms and from Jammu airport it is 22 kms.
“A required infrastructure has been developed by the Directorate of Tourism, Jammu in Suchetgarh, close to the border, for the ‘retreat ceremony’ and under the border tourism project, a restaurant besides seating arrangement, park and other facilities are enhanced to make this place lively for the visitors,” said an official.
He asserted that all the preparations are in place to start the ‘retreat ceremony’, adding, “as it is also an event of national importance, a decision on the final date for its inauguration has not yet been taken but it is sure that it will be done in the coming month.”
“Yes, ‘retreat ceremony’ will be inaugurated in the month of October but the final date officially is yet to be announced. Moreover, all arrangements have been made to start this mega project,” Vivekanand Rai, Director Tourism, Jammu confirmed to UNI.
On the other side of Suchetgarh lies the first city of Pakistan, Sialkot, which is only 11 kilometers away from Suchetgarh.
Rail service between Jammu and Sialkot was started in the year 1897.
This was the first railway route in Jammu and Kashmir mostly used for trade. Before the Indo-Pak partition, people from both the sides used to travel through this railroad to Lahore and onwards.
This year till mid of September, around 61.33 lakh tourists visited the Jammu region including 70,643 to Suchetgarh.
However, on an average, 5000 to 6000 tourists every day reach Suchetgarh. The Directorate of Tourism, Jammu had recently made vigorous efforts to promote tourism spots and invited tourists from across the globe to visit Jammu and Kashmir and explore the scenic beauty.
The Directorate of Tourism, Jammu Province has also appointed Delhi-based infrastructure consultancy company Rudrabhishek Enterprises Ltd. (REPL), as Technical Consultants for development of Tourism Projects in Jammu region.
The tourism projects being developed include types of tourism activities i.e., Mountain, Adventure, Heritage, Eco-tourism and Pilgrimage tourism etc. Jammu and Kashmir Government has also identified as many 75 locations to be promoted as tourism hubs across the Union Territory.
The Jammu and Kashmir Administration is also organising a three-month long festival from the month of October to showcase tourist destinations and rich culture of the Union Territory to attract tourists from across the country and worldwide.
Suchetgarh has a historical significance ever since Dogra rule was established in the erstwhile state in the mid-18th century.
It used to be an important trading point between Sialkot and Jammu before Partition. The border dwellers for decades have been demanding the start of a ‘ceremonial parade’ between two forces just like Wagah.
Village Suchetgarh in R S Pura Sector (Tehsil) of Jammu is surrounded by nearly 10 border villages. (UNI)