Excelsior Correspondent
UDHAMPUR, Feb 22: Retd Director General of Police (DGP) Dr Ashok Bhan delivered lecture on the topic “Citizen Centric Administration” at SK Police Academy, here today.
The lecture was attended by the trainee Probationer DySPs, PSIs, ASIs and staff of SKPA.
During his deliberations on the topic, Dr Bhan shared his view that general public perceive the administration as pro political executive and bureaucratic centric and this perception has to be erased by the deliverance to the public on the touch stone of fairness, transparency, accountability, putting decisions on public domain and by imbibing the principles of ethics, values, integrity, honesty and morals.
He stressed upon the officers not to get influenced by religion and caste, not to misuse the discretionary powers, always be apolitical, to respect merit and deliver the public service in time. He advised that all our acts must be “Citizen Centric” always and every time.
He impressed that the Administration should reverse from “Nexus Model” to “Citizen-Centric Model” of administration.
He advised the trainee officers to always make a distinction between good and evil, between right and wrong and between what is virtuous and non virtuous and advised that systematic changes hold the key and to leverage on technology to promote transparency.
Retd DGP presented to the trainee officers the citizen centric model of administration and impressed upon them to follow this model over nexus model. He advised the trainee officers and staff of SKPA Udhampur to train themselves and muster courage to say ‘No’ to unethical orders and try not to be in conflict with the environment.
In the end, he exhorted the trainees that before taking any decision always ask these question to yourself first that as to whether the decision that is being taken by you is in public interest?, Whether the decision has been taken without fear or favour?, Will the decision benefit the needy irrespective of his/her socio religious background?, Is the decision without any selfish motive?. If you get an affirmative answer to this then it can be said to be the right decision, he added.
Earlier, Director SKPA Udhampur Mohammad Sulaiman Salaria, ADGP welcomed Dr Ashok Bhan and briefed him about the functioning of the Police Academy Udhampur.
The proceedings were conducted by Kamal Sharma, CPO who also presented the vote of thanks in the end. 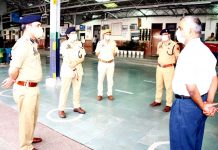