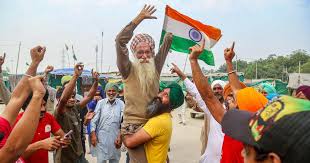 Wg Cdr Mahesh Chander Sudan (Retd)
We, the people of India, have witnessed un-expected ann-ouncement by Prime Minister of India on 19 Nov 2021 for repealing three controversial Farm Laws passed by Parliament in Sep 2020. These three Farm laws were contended by farmers across north India and some of them launched protest against these laws at the borders of Delhi since 26 November 2020. These three laws namely the Farmers Produce Trade and Commerce (Promotion and Facilitation) Act 2020, the Farmers (Empowerment and Protection) Agreement on Price Assurance and Farm Service Act 2020 and the Essential Commodities (Amendment) Act 2020 began their journey on 05 Jun 2020 in the form of three ordinances promulgated by the President of India and later passed by the Parliament in Sep 2020. The farmers basically from Punjab, Haryana and Uttar Pradesh protested these bills as anti-farmers and demanded repealing them unconditional. Sensing the severity of the protest, the Supreme Court of India stayed implementation of these laws on 12 Jan 2021 Hence; these laws remained operational only for 221 days. Government of India defended these laws throughout and termed them historic reforms in agriculture. Sudden announcement of repeal of these laws may reward long struggle of farmers to some extent but it definitely raises issues with regard to issue of ordinances, passage of bills in the parliament despite strong opposition and involved urgency in the implementation of these bills.
Indian Parliament has authority to enact, amend and repeal any law. Laws are enacted for welfare of the state and any variation arising therefore that may possibly hurt the interest of the people at large should attract the attention of the legislators. In the instant case the farmers themselves protested these legislations and sought the attention of Indian Government and judiciary for necessary correction. It is seen that the Judiciary ordered stay on implementation of these laws but the government of India continued defending these acts and chooses to remain insensitive to ground reality. There is a precedent where the present BJP government in her first tenure yielded to opposition demand of withdrawing contentious ordinance which was brought to amend the Right to Fair Compensation and Transparency in Land Acquisition, Rehabilitation and Resettlement Act 2013. It appears that strength of public mandate acquired in the present tenure and the political interest of the party in power guided them to ignore the demand of the farmers. At this juncture, when the changed political scenario across the northern states owing to the farmers protest affects impending elections in five states including most crucial Uttar Pradesh modifies the approach of present Union Government towards protesting farmers that resulted in announcement of repealing contentious Farm Bill. However, the negligence on the part of ruling dispensation in handling an issue affecting a large community of farmers has intensified the sense of annoyance especially when the farmers have lost around 750 human lives in the process including murderous attempt at Lakhimpur (UP). There are critical issues with regard to MSP (Minimum Support Price) and farmers are demanding legislative provision incorporated in the system to avoid future complications. There are contrasting calculations being put forth with regard to the timing of the decision to announce repeal, mostly it seems linked with a concession to the Sikh community who formed significant segment of protesting farmers and would certainly reduce tension during upcoming elections in the five states.
No doubt, the winter session of the Parliament is scheduled to start in the last week of November this year and bill is planned to be presented in the house so that these contentious Farm Laws are repealed but the delay of more than 13 months in appreciating the requirement sends disturbing signals. It conveys that the ruling dispensation is not sensitive enough to feel the nerve of the masses that hurts the spirit of democracy at large. A democratic system of government is a form of government where supreme power vests with people and it is exercised either directly or through their representatives for the welfare of the state. In the instant case, our system has performed in contravention and failed to acknowledge the voice of the affected farmers promptly and responsibly that widened the gap between the ruler and the ruled. The trust deficit that so emerged would demand a comprehensive analytic approach to correct the situation so that farmers cease their protest and return to their fields for farming undisturbed. However, it is expected that government of India would provide due compensation to the bereaved families of the deceased farmers, and law would be allowed to take its own course in case of vehicle ramming attack and mob lynching incident during farmers protest.
In the prevailing situation, it is expected that the government of India would shed its political leaning and act in accordance with democratic practices to solve the issue in totality and moves towards implementation of SwamiNathan Report on National Commission on Agriculture to explore causes for farmers’ distress, distribution of Land, other recommendations on irrigation and productivity of Agriculture. A comprehensive and inclusive approach to institute reformative steps in consultation with professionals, scientists, economists and other stake holders of Agriculture sector is the need of the hour that would boost up productivity, cost competitiveness and ensure MSP (Minimum Support Price) as viable proposition. Any future endeavor in this regard should have holistic approach to reform the sector so that it offers attractive proposals to the future generation of farmers and held India to sustain self-reliance in Agriculture sector and contain rural migration to Urban India for jobs. Jai Hind, Jai Bharat.