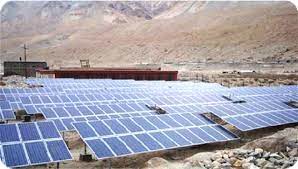 Since it is not that easy to connect Ladakh region to the main national grid of the country to the extent of cent percent electrification due to geographical reasons and there being huge potential for generation of renewable energy in the cold desert, having otherwise got the largest solar power project set up under the Central Government’s “Make in India ” initiative at Leh IAF station , on the other hand, establishment of much hyped renewable energy project with generation capacity of 10 Giga Watt (GW) appears to have plunged into a fate of uncertainty. Local issues which are the domain of the UT Government to look into and resolve , as on date, continue to be haunting the renewable energy project comprising solar and wind parks. It may be noted that it was decided to call bids for the largest global tender for setting up of 13 Giga watt grid scale battery storage system in Ladakh to help the country’s electricity grids as the clear energy sources like solar and wind are abundantly available in the region. However, where do the projects stuck up appears not on priority to be looked into and duly addressed.
It is not all sufficient to only harp on claiming about the vast potentiality of the renewable energy in Ladakh and fully realising there being sufficient support from the Central Government too for harnessing the same and even devising the means to achieve the objectives unless the UT Government appears to be quite serious to push the project ahead towards being set up. If it is not so, or appearing not so much encouraging, in respect of proceeding ahead , why no progress in respect of setting up of the proposed Renewable Energy Park at Pang is visible or otherwise made known. What are the issues that impede the setting up the Park need to be resolved by the UT Government. Even surveys of land and other connected preparations do not seem to be around for reasons not known. It would be all known through comprehensive survey of the land for the project as to which agencies of the Government had any sort of stake and what could be the compensation component involved to be paid and rest of the important pieces of information.
If an appraisal of the entire project is made , it is observed that much talked of 20000 acres of land which was to be provided by the UT Government at Pang along Leh Manali Highway for the Solar Park has not been procured not to speak of additional land of the same size for which possibilities were decided to be explored. Needles to add, UT of Ladakh is destined to receive revenue on yearly basis on account of leasing out the land allocated for setting up of Renewable Energy Park. The problems of various hues even in the knowledge of the Union Ministry of New and Renewable Energy and their intervention too towards resolution of the impasse could not bring out any results in respect of projections by which date the Park would be set up. That sounds quite queer.The problem in respect of generation capacity which kept oscillating between 7.5 GW and 10 GW finally was resolved late last year to be 10 GW.
As we often observe and point out too that the most critical phase of a project is in respect of procuring land and side by side ensuring completion of all sundry formalities like obtaining NOCs from various authorities and agencies, conducting surveys and collating critical information are paramount. The importance of the concerned renewable energy project needs to be seen in the context of the requirements in the energy generation and transmission area by the cold desert region and once commissioned , besides Ladakh region even the UT of Jammu and Kashmir could benefit from it. Hence we feel that invigorated efforts must be taken in respect of setting up of the Park at an early date