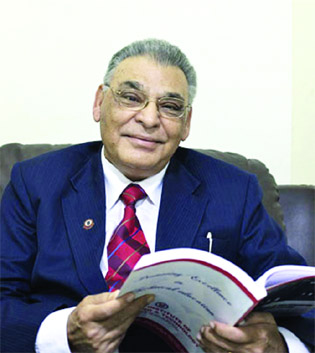 Ravi Rohmetra
From time to time, Jammu, the city of temples has produced a number of personalities who have made a remarkable contribution in the development of the city and the society. One such name among them is Arun K Gupta, an educationist par excellence who gave a new direction to education sector in Jammu and will be remembered forever by the coming generations for his contribution in this sector.
On his death anniversary, it would be worthwhile to recall his contribution as to make it an example for others to follow.
Dr Arun K Gupta was born on 24th July, 1943 at Jammu. His parents were late Harbans Lal Gupta and Smt Shanti Gupta. He was the only son of Harbans Lal Gupta among four daughters. Dr Gupta received his early education at Model Academy School, Jammu. He completed his graduation from GGM Science College, Jammu. After graduation, he finished MA English from Kurukshetra University and completed M.Ed (Gold Medalist) and Ph.D from Punjab University, Chandigarh. After completing his education, he took over as Principal, Model Academy in the year 1966. He remained on this position for a period of 13 years. In the year 1986, Dr Gupta joined as Principal in the MIER College of Education-a unit of MIER Group of Institutions. It was the first college in private sector established in the year 1981 in Jammu Province to impart instructions in B.Ed. During his tenure the college was granted permanent affiliation by the University of Jammu in the year 1989.
Dr Gupta was deeply committed to the cause of quality education, research and training for the last 50 years as Educator and Researcher (including 25 years as Director, MIER). Acclaimed as a leading authority in the discipline of education. Dr Gupta has directed prestigious research projects sponsored by reputed pofessional agencies namely the ICSSR, NCERT, UNICEF, ICMR and Govt of India etc. Besides, he was also a paper setter and evaluator for MA (Edu), M Phil, Ph.D and supervised Ph.D researches at Jammu, Kurukshetra and Saugar Universities. He was a member of several important educational committees and was associated as a consultant on several on-going projects and initiatives.
He had been the member-Incharge, Asian Region in the Research Committee of the International Council of Distance Education, a UNESCO affiliate,being the only Asian to be represented on the Committee for two consecutive terms. His name figures in Asia’s WHO’s WHO. He was twice selected for the ‘National Award’ by the National Council of Education Research and Training (NCERT), Delhi. He was also the North India and J&K State Chancellor for the International Association of Educators for World Peace (IAEWP) and the President of the J&K State Harijan Sevak Sangh, a trust set up by Mahatma Gandhi. He was also the Chartered President of the Forum of Recognised Colleges (J&K).
Dr Gupta published more than 150 research papers in reputed professional journals in India and other countries and contributed to several prestigious publications in and outside India. He was the author of several books which had won him acclaim in the educational world. He had also served on the Editorial Board of the Canadian Journal of Distance Education. He was also the Fellow of United Writers Association of India and an alumnus of International Visitorship Programme of US Govt.
Widely travelled, Dr Gupta has presented papers and chaired sessions and several international conferences outside India, in some of which he was sponsored by UNESCO, USIS, UNDP and Civitas International.
Dr Gupta was closely associated in different capacities with several organizations doing active work in the field of environment, population education, women and youth studies, rural and community development and peace education, strengthening of democracy and civic education and other social issues. He was an acknowledged leader in the above said fields. He has been covered widely in the media and appeared regularly on the Radio and TV.
He has been the President of the Indian Jaycees and Lions Club of Jammu Tawi (5 times) and has functioned as a high ranking official including as a Deputy Distt Governor (321-D). He received numerous awards for rendering outstanding social services. Among these are the ‘Order of Merit’ and ‘Samaj Shri’ awards conferred by the Indian Council of Management Executives, ‘Distinguished Leadership’ and ‘Man of the Year’ awards of the American Biographical Institute for making outstanding contributions to contemporary society and ‘Outstanding Contributions to Education’ awards by the All India Citizen’s Council, J&K and Citizen Forum and Parent Teacher Association of India. He was also elected an honorary member on the Research Board of Advisors of the American Biographical Institute (1999). Among other honours conferred on him in rencent years, mention can be made of his inclusion among 2000 Outstanding Intellectuals of the 20th Century and ‘Outstanding Speakers Award’ by International Biographical Centre, Cambridge, England. ‘Sarvshri Award 1999’ Life Fellowship and Gold Medal for ‘Management’ by the Special Executive Magistrate’s Society, Mumbai, ‘Great Indian Achievers Award 1999’ by the Management Studies Promotion Institute, New Delhi and ‘Life Time Achievement Award’ by Abraham Lincoln Shiksha Society. Dr Arun Gupta expired on 31st January, 2021. It is a humble tribute to his immense contributions in the field of education on his first death anniversary. He was an institution in himself, a leader par excellence and an amazing human being. He developed MIER College of Education and Model Institute of Engineering and Technology as a visionary way ahead of his times and led the MIER Group to great heights of glory.
Today, Dr. Renu Gupta, Chairperson, Dr. Adit Gupta, Director MIER and Dr. Ankur Gupta, Director MIET are carrying forward his great legacy.