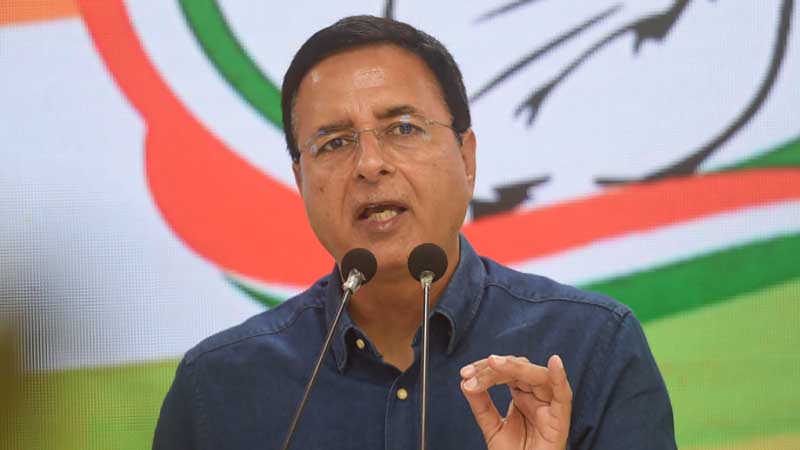 NEW DELHI, May 26:
The Congress on Thursday attacked the Government on its eighth anniversary alleging that this period has been marked by misery and misgovernance with high inflation, low employment and communal polarisation being the hallmark.
Addressing a joint press conference here, Congress leaders Randeep Surjewala and Ajay Maken claimed the BJP Government has broken all records of “hoodwinking” its own people with fake ‘jumlas’ and slogans during its eight years of rule.
They alleged that the promise of “achche din” made to people has only turned out to be “achche din” for the BJP and a select group of crony capitalists and industrialists whose wealth has increased manifold.
The Congress also released a booklet in Hindi “8 saal, 8 chhal, BJP Sarkar Viphal” (8 years, 8 deceits, BJP Government failed) to highlight, what is called the “failures” of the BJP Government on various fronts.
Maken claimed that one after another, BJP’s disastrous policies contributed to the fall of the Indian economy.
What was once the fastest growing economy, is now in turmoil thanks to the BJP’s 8 years of misgovernance, he alleged, adding that inflation is touching an all-time high and so are unemployment levels.
Surjewala said the eight years of BJP rule has seen continuous threats to the sovereignty and security of our country, with China continuing to infiltrate our borders, and the Prime Minister remaining silent.
“What happened to the PM’s 56” chest and ‘laal ankh’ (red eyes),” he asked, referring to the remarks of Modi ahead of 2014 elections that one needs to have a 56-inch chest to take on China.
Surjewala said the slogans given by the BJP ahead of 2014 polls are now being assessed by the people of the country as all have proved wrong.
He cited several such slogans given by Modi to attack the previous UPA Government on issues of price rise, unemployment, economy, deteriorating value of the rupee and on India’s sovereignty and integrity and said “all those slogans, promises and ‘jumlas’ highlight the failures of the Modi Government”.
Citing the slogan “achche din aane wale hain”, he asked “whose ‘achche din’ has come” and claimed it is of the BJP and those crony capitalist friends of Modi whose wealth has multiplied at a time when the average income of every Indian has reduced during Covid times.
Surjewala also claimed that 84 per cent Indians have seen reduced incomes and 12 crore people have lost their jobs, even as 60 lakh MSMEs have shut shop with unemployment touching 45-year records, but two-three industrialists have seen their incomes rise by Rs 1,000 crore everyday and 142 super rich made gains of Rs 30 lakh crore in the last one year during Covid.
“While high prices are upsetting the budgets of common people on the one hand, on the other communal fires are flaring and the BJP is trying to benefit politically from it,” he said.
Maken also accused the BJP of garnering votes in the name of bravery of soldiers but did not even recognise their services by giving them one rank, one pension as was promised by the previous Congress-led UPA Government.
Accusing the BJP of spreading hatred in society through communal polarisation, Maken alleged that 10,000 cases of communal clashes have taken place during the last eight years of Modi Government.
He also said the BJP has not bothered about the welfare of SCs/STs/OBCs as government jobs are lying vacant in several entities.
The two leaders said while there is an attack on the national security and territorial integrity of India by China, which continues to occupy Indian territory, Modi and his Government are silent.
They also said there has been an increase in Naxal attacks in the country, even as large consignment of drugs are getting into the country with impunity in ports privately managed in the country. (PTI)