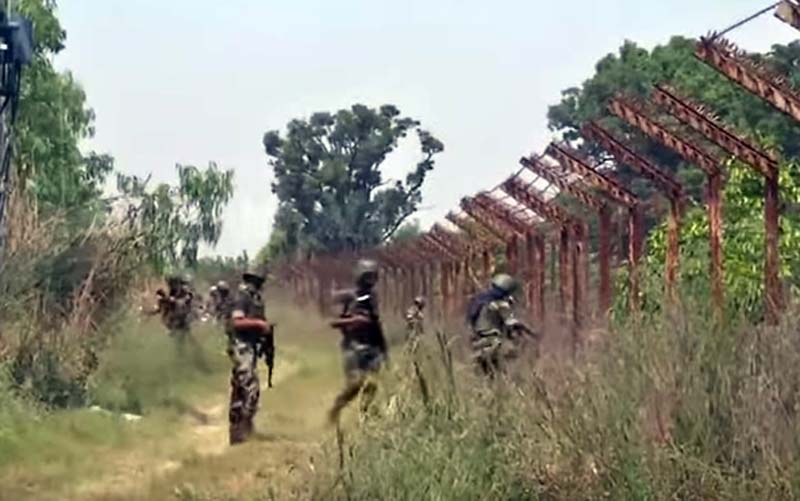 Excelsior Correspondent
JAMMU, Sept 6: Pakistani Rangers violated the ceasefire this morning as it targeted Border Security Force (BSF) troops in unprovoked firing along the International Border in Arnia sector of this district.

Click here to watch video
The BSF gave a “befitting reply” to the firing from across the border.
Such violations have not been very common since India and Pakistan agreed for a renewed ceasefire along the borders in Jammu and Kashmir on February 20, 2021.
“This morning, the alert BSF Jammu troops gave a befitting reply to the unprovoked firing by Pakistan Rangers on a BSF patrolling party,” BSF offcials said.
They also said there was no casualty on the Indian side.
Officials said Pakistani Rangers posted in Khanor started the firing at the BSF troops who were busy in some “maintenance work” near the border fence at the Border Outpost Chinaz around 8.55 am.
The BSF personnel retaliated, and the exchange of fire continued for a brief period, the officials said, adding some 15 to 20 shots were fired from both sides.
Senior BSF officers rushed to the border outpost and are keeping a close watch on the situation, the officials said.
The February 2021 ceasefire is holding barring some exceptions.
This has brought relief to the border residents and farmers who have resumed farming activities along the Line of Control and the International Border.
Meanwhile, hours after the ceasefire violation, BSF and Pakistan Rangers held a flag meeting along the International Border here and agreed to respect the “existing norms”, an official said.
The Company Commander Level meeting at 1.45 pm on border ended in a cordial atmosphere, Deputy Inspector General of BSF S P S Sandhu said.
“The issue of unprovoked firing was discussed and both sides agreed to exercise maximum restraint on the border. Both sides agreed to respect the existing norms in future,” the Public Relations Officer, BSF Jammu, said.