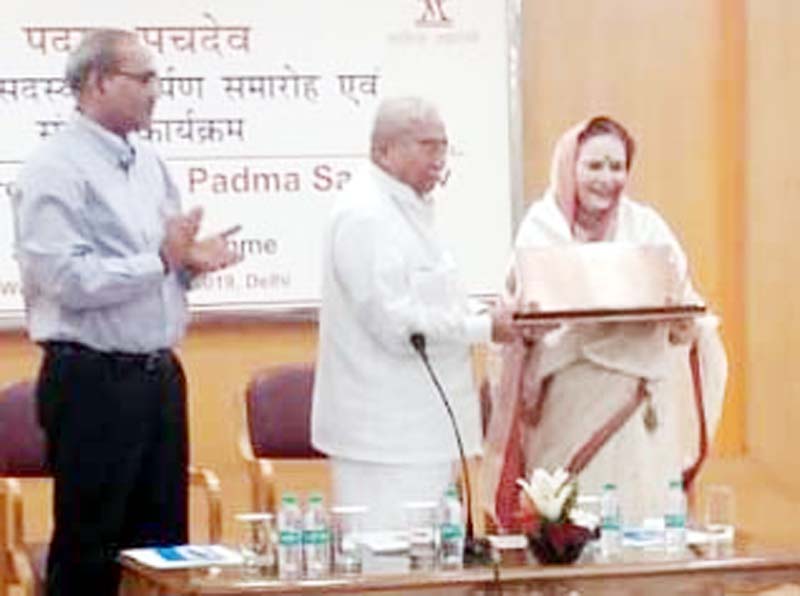 NEW DELHI, June 12: Eminent Dogri poetess and writer Padma Sachdev was conferred  the highest honour  of Sahitya Akademi its fellowship at an impressive function held here today.
Prominent personalities of the literary world including dogri poets and writers attended the event.
She was conferred the honour by Sahitya Akademi chairman, Chandrashekhar Khambar at the Akadmi premises.
Ms Sachdev has become the eighth writer to receive this honour. Later an interactive programme titled ‘Samvad’ was also held which was presided over by Dogri poet and writer, Mr Darshan Darshi who is also convenor of Dogri Writers Board of the Akademi. Other participants who took part in it included another prominent Dogri poet, writer and theatre activist Mohan Singh and prominent writers Chitra Mudgal and Prof Inderjit Chaudhary. Also present on the occasion was her husban and famous singer Surinder Singh of the Singh bandhu fame.
In her acceptance speech, Sachdev  traced her journey as a Dogri writer and poetess and how she got her first Akademi honour along with top writers of that era Mulk Raj Anand, Namvar Singh and Rashid Ahmed Siddiqui.  She reminded the audience that the Akademi was set up by India’s first Prime Minister Pandit Jawaharlal Nehru to encourage all Indian language through their literature.
In his presentation, Mohan Singh read a paper based on Sachdev’s literary journey and her contributions in getting Dogri its due place at national level.
Earlier, a citation was read on the occasion conferring fellowship on her. The citation traced her contributions in the field of literature particularly her mother tongue Dogri and touched upon the vast repository of literary work done by her.
“Her eagerness to introduce Dogri language to wider audiences kindled the flame of prose-writing in Padma Sachdev. Though she wrote short stories in Dogri, Hindi was to be her language for prose. She has repeatedly written for newspapers and periodicals about her language, current events, festivals and the burning topics related to Indian women and their problems.  Known both as a poet and prose writer in her native language Dogri, and mainly for her prose in Hindi, she believes that when it is a matter of the heart it is only the mother tongue that is a fit and suitable vehicle of expression, and hence, all her important poetical works are in Dogri,” the citation read while recognizing her contributions.

People suffering due to misrule of BJP: Bhalla

One killed, 7 injured in road accidents

Give OBC status to Jat Community in UT: Manjit