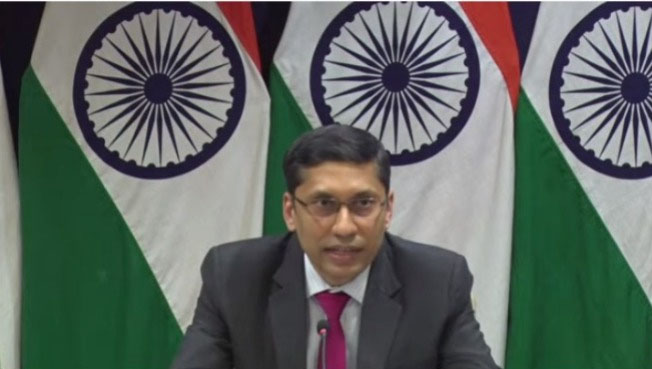 New Delhi, Feb 28: India has evacuated over 8000 nationals since the initial advisories were issued by the country, Ministry of External Affairs spokesperson Arindam Bagchi said.
“Evacuation efforts on Ukraine situation on the ground continue to be complex and fluid, some of them quite concerning, but we’ve been able to accelerate our evacuation process. Over 8000 Indian nationals have left Ukraine since we issued the initial advisories,” the MEA spokesperson said on Monday while addressing the media briefing.
He also informed that the six evacuation flight have landed in India bringing back around 1400 citizens.
“The six evacuation flights have landed in India bringing back around 1400 (1396) citizens. The four flights were from Bucharest (Romania), while the other two were from Budapest (Hungary), he said.
Ministry of External Affairs also informed that the government will send four Union Ministers as four special envoys to neighbouring countries of Ukraine to coordinate evacuations of stranded Indians amid ongoing Russian military operations in Ukraine.
“Decision to deploy special envoys to the four countries bordering Ukraine. Union Ministers Jyotiraditya Scindia will be going to Romania, Kiren Rijiju to Slovak Republic, Hardeep Puri to Hungary, VK Singh to Poland to coordinate and oversee the evacuation process,” Bagchi said further.
“Union Ministers Hardeep Singh Puri, Jyotiraditya Scindia, Kiren Rijiju and Gen (Retd) VK Singh will travel to neighbouring countries of Ukraine to coordinate the evacuation mission and help students,” he said.
The union government has launched Operation Ganga to bring back stranded students and Indian citizens from the conflict-torn Ukraine.
Further, the Indian embassy in Ukraine today informed that the weekend curfew has been lifted in Kyiv. The embassy said that Ukraine Railways is putting special trains for evacuations and advised all students to make their way to the railway station for a journey to the western parts. (Agencies)