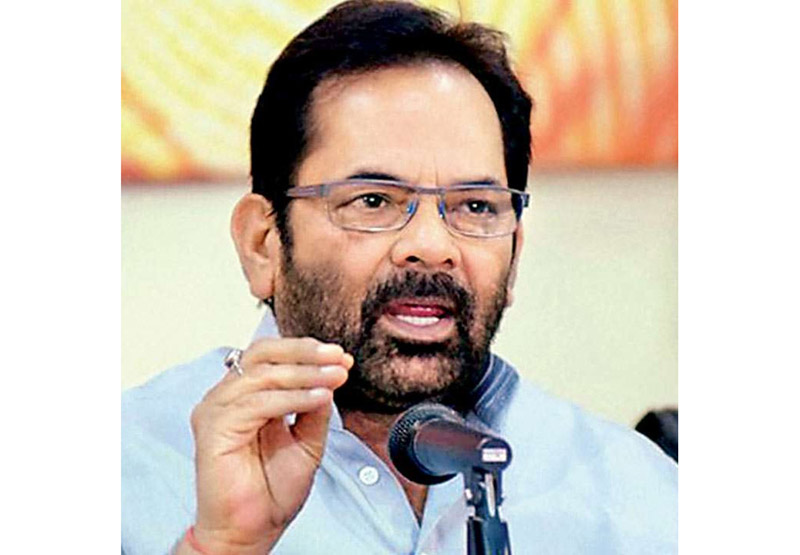 NEW DELHI, Aug 13: In a swipe at the Opposition, senior BJP leader Mukhtar Abbas Naqvi on Saturday said it has already prepared a “waiting list of two dozen prime ministerial candidates” without even a vacancy for the post.
Addressing a program in Uttar Pradesh’s Rampur, Naqvi said those suffering from the “political disease of Modi phobia” will vanish soon.
“Posturing and pretence” of “pessimist political players” can never defeat the hard work and honesty of Prime Minister Narendra Modi, he asserted.
The Opposition has already prepared a “waiting list of two dozen prime ministerial candidates”, he said, taking a dig at Opposition parties.
This is called “vanity without vacancy”, the former Union minister added.
Naqvi said that despite all the “political intolerance and fake and fabricated allegations”, Prime Minister Modi is working tirelessly and diligently with the commitment to “inclusive empowerment”, Naqvi said.
He said that for Modi, the security and dignity of the country is “Rashtraniti” while the welfare of every needy is “Rashtradharma”.
The “Har Ghar Tiranga” campaign has been launched under the Azadi Ka Amrit Mahotsav to commemorate 75 years of independence of the country and this campaign is playing an important role in connecting the people of the country with its golden heritage and history, Naqvi was quoted as saying by a statement from his office.
“The Tiranga unites us and inspires us to do something for the country,” he said.
Naqvi said the Azadi Ka Amrit Mahotsav has become a mass movement.
During his Rampur visit Saturday, Shri Naqvi participated in “Tiranga Kite Programme ” at Mahatma Gandhi Stadium (Physical Ground) where the tricolour was honoured by flying 75 kites.
Naqvi also inaugurated a multipurpose building (Women’s Health Care, Sports Ground, Amrit Sarovar) at Tanda. He also inaugurated the office of UP Udyog Vyapar Pratinidhi Mandal in Tanda.
Rampur Lok Sabha MP Ghanshyam Singh Lodhi; Uttar Pradesh Minister Shri Baldev Singh Aulakh; Rampur Zila Panchayat president Khyaliram Lodhi; and other senior people’s representatives and dignitaries were present on the occasion. (PTI)