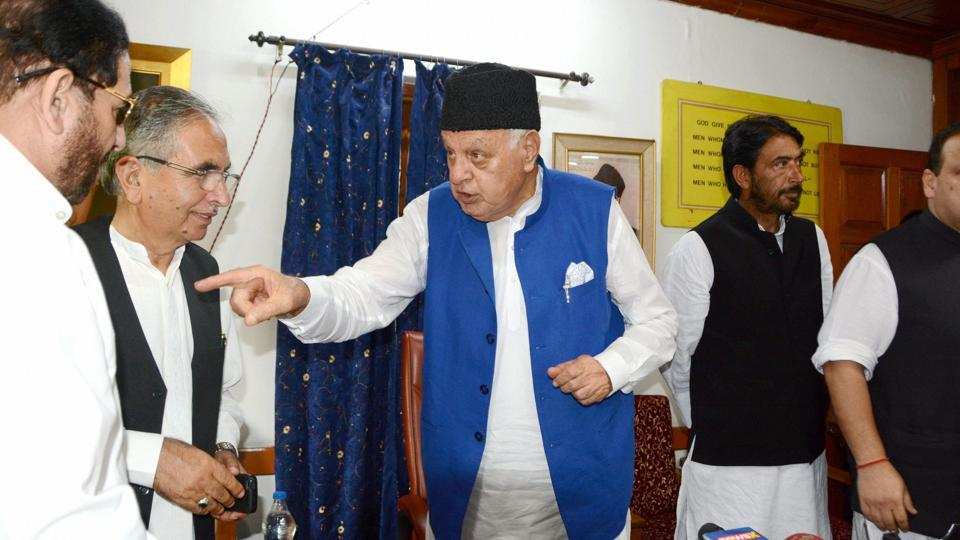 Sanjeev Pargal
JAMMU, Sept 7: With no political party getting majority in the elections to Ladakh Autonomous Hill Develo-pment Council (LAHDC), Kargil, the National Conference, which has emerged as single largest party, is all set to form the local Government but it was looking for allies as it needs support of minimum six more Councilors in the House of 30 for simple majority.
While top National Conference leaders confirmed to the Excelsior that they were in touch with Congress and some Independent Councilors to form the local Government in politically-sensitive Kargil, the BJP claimed that it got calls from two senior NC leaders seeking its support for securing majority in the Council.
The NC had secured 10 seats followed by Congress 8, PDP 2, BJP one and Independents 5 in the elections held for 26 seats of LAHDC Kargil on August 27, the results of which were declared on August 31. However, the State Government had to nominate four Councilors to the LAHDC with voting rights and the BJP is hoping that its tally could go up to 5 after the nominations.
To form the Government, any party would need support of 16 seats.
Deputy Commissioner, Kargil, Vikas Kundal told the Excelsior that oath ceremony of the newly elected Councilors will be held at 2 PM at Conference hall, Baroo tomorrow. He said the Principal District & Sessions Judge will administer the oath. After the oath ceremony, the process for formation of the new Council will be set into motion.
Former Minister in previous Omar Abdullah Government and NC leader Feroz Khan, who is believed to be the NC candidate for the post of Chief Executive Councilor for the LAHDC Kargil, said the NC was in touch with Congress for formation of strong Council in the district to avoid repeated elections for the posts of CEC, which was witnessed in the last Council when three Chairmen-cum-CECs were elected during five years.
“We have 10 seats. We have confirmed support of two Independents. The Congress support will take our tally to 20 in the House of 30 and it will be a strong local Government to work for welfare of the people,” Khan said, adding they were in talks with senior Congress leaders and Independents and that things would be clear in the next couple of days.
Congress MLA from Kargil and former Chairman-cum-CEC of LAHDC Kargil, Haji Asgar Ali Karbalaie confirmed that the Congress was not in race for formation of the Council.
Karbalaie said the Congress has won eight seats and it can have the support of two Independents. “That will not make the numbers for us,” he said, adding since the National Conference has emerged as the single largest party in the Council, it was up to them to prove majority.
BJP State president Ravinder Raina, however, claimed that National Conference district Kargil president, Haji Hanifa Jan, former Chairman-cum-CEC of LAHDC Kargil and Feroz Khan, NC’s CEC candidate this time, have spoken to him and sought support of the BJP for formation of the Council in Ladakh.
“As this was crucial political decision, I will place the matter before BJP’s National Executive in New Delhi on September 8 and 9 for taking a final call,” Raina said.
Officially, no NC leader confirmed having sought the BJP support to form the Council.
When contacted, Haji Hanifa Jan stated that the National Conference was in touch with Congress as well as Independents.
“We have confirmed support of two Independents. We are also trying to approach two other Independents. However, even if four Independents support us, we will reach the figure of 14, two short of the majority,” Hanifa Jan, who had served as Chairman-cum-CEC in the previous Council, said.
Of five Independent Councilors, two each have their affiliations with National Conference and Congress while fifth one, Kacho Ahmad Ali Khan, who is still officiating as Chairman-cum-CEC Kargil, is backed by the PDP, which had won two seats for the first time in the LAHDC Kargil.
Kacho Khan told the Excelsior that he was trying to cobble up an Alliance of Independents, PDP, Congress and BJP to again become the CEC.
“Efforts are on and you will see the results soon,” he said.
Kacho, an Independent in the previous Council as well, had become the CEC with the support of Congress and Independents toppling the National Conference backed local Government. Kacho had his affiliation with the PDP but had contested the election as an Independent candidate.
Sources said there was strict Anti-Defection Law in the LAHDC Kargil under which even an Independent can’t join a political party but can extend or take support. In view of this, there was no scope of horse-trading.
In the outgoing Council, Congress leader Haji Asgar Ali Karbalaie was elected as first Chairman-cum-CEC with the support of Independents as Congress had only 10 seats on its own. However, as Karbalaie was elected as Congress MLA from Kargil in 2014 Assembly elections, National Conference virtually captured the Council by supporting Independent Councilor Haji Mohammad Hanifa Jan for the post of Chairman. With PDP at the helm of affairs later, Independent Councilor Kacho Ahmad Ali Khan, who had unofficially affiliated himself with the PDP, became the Chairman-cum-CEC with the support of Congress Councilors and is still continuing on the post.