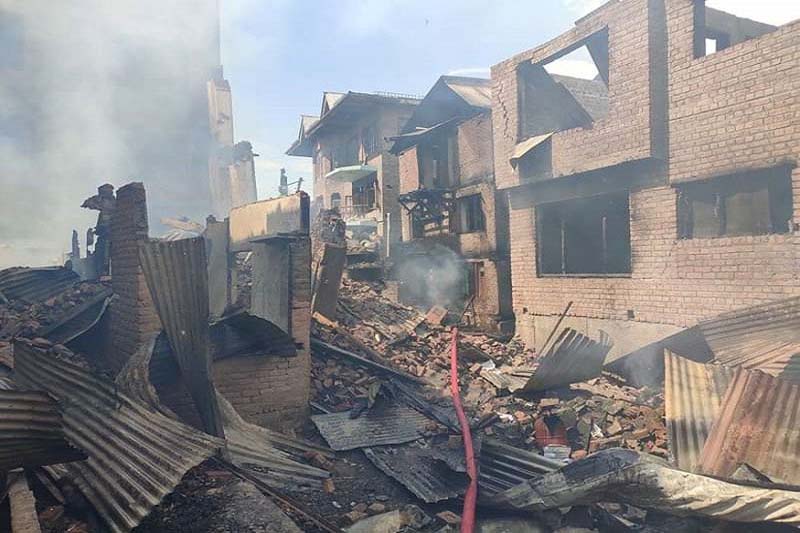 Srinagar, May 24: Two persons who were injured during a house collapse damaged in the encounter last week in Nawa Kadal area of Srinagar today succumbed to their injuries at a hospital taking the death toll to three.
A 55-year-old man, injured in a house collapse following encounter at Kanimazar Nawa Kadal here last week, succumbed to burn wounds at SMHS hospital here this afternoon.
Manzoor Ahmad Khan son of Abdul Aziz from Hawal Srinagar had suffered serious burn injuries after one of the several houses damaged in gunfight between militants and security forces at the Nawa Kadal collapsed.

Click here to watch video
Another injured man identified as Fayaz Ahmad Bhat, 35, son of Muhammad Hafeez Bhat of Jamalatta, Nawa Kadal, Srinagar, also breathed his last at SMHS hospital this morning.
Earlier on May 20, a 12-year-old boy who was among the four injured at the encounter spot on May 19, succumbed at SMHS. He was the first casulty of house collapse. The boy was identified as Basim Aijaz, of Chotta Bazar area of Karan Nagar.
These people were injured when a house collapsed after the gun battle in Kanimazar Nawa Kadal area of Srinagar on May 19.
Two militants including Junaid Sehrai, son of Mohammad Ashraf Sehrai, chairman Tehreek-e-Hurriyat, were killed in the gunfight with police and CRPF. Over a dozen houses were damaged in the encounter during the gun battle and at least four persons were injured.
Clashes broke out this morning and continued intermittently during the day in Chotta Bazar, Kani Kadal and Safa Kadal areas of Srinagar in protest against the death of the two persons.
Police had sealed the area since morning and deployed hundreds of security force personnel to prevent any violence. The protesters pelted stones on the police and CRPF leading to clashes during which police fired tear smoke to disperse the protesters. Several protesters were injured in the clashes.
The bodies of the two persons were not handed over to the families for burial as authorities fear trouble in the area. However, sources said that the bodies may be handed over during the night for burial in which only few people will be allowed to take part.

Security forces today arrested four Over Ground Workers (OGWs) of Lashkar-e-Toiba (LeT) and recovered arms and ammunition from their possession in Central Kashmir district of Budgam.
Police said that on a credible input, Budgam Police along with 53RR of Army arrested four OGWs of LeT identified as Waseem Ganie, resident of Hardulatina Beerwah, Faruk Ahmad Dar, Mohammad Yasin and Azharudin Mir, all residents of Kandoora Beerwah.
Police said that incriminating materials including arms and ammunition were recovered from their possession.
As per the police records, they were involved in providing logistic support and shelter to the militants of LeT operating in the area.
A case (FIR No. 126/2020 under relevant sections of law) has been registered in Police Station Beerwah and further investigation in the matter is in progress.