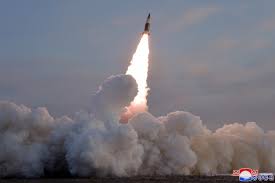 Seoul, Jan 18: North Korea on Tuesday confirmed that it had conducted the test-firing of a tactical guided missile a day earlier.
“The test-fire was aimed to selectively evaluate tactical guided missiles being produced and deployed and to verify the accuracy of the weapon system,” Yonhap quoted the North’s official Korean Central News Agency (KCNA) as saying.
North Korean leader Kim Jong-Un did not attend the firing.
This was North Korea’s fourth show of force this month.
On Monday, South Korean military had reported that the North had fired two suspected shot-range ballistic missiles eastward from the Sunan airfield in Pyongyang.
The latest firing appears to have involved the North’s version of the US’ Army Tactical Missile System (ATACMS), called the KN-24, Yonha said while citing a photo as released by Pyongyang media.
“The two tactical guided missiles launched in the western area of the DPRK (Democratic People’s Republic of Korea) precisely hit an island target in the East Sea of Korea,” the KCNA said.
The latest launch came just three days after the North launched two suspected short-range ballistic missiles into the East Sea that it later claimed to be guided missiles fired by a railway-borne regiment during a firing drill, Yohnap News Agency said in a report.
The North had test-fired its self-proclaimed hypersonic missile on January 5 and on Tuesday last week, ratcheting up tensions amid an impasse in nuclear negotiations with the US, the South Korean News Agency said.
Last week, Pyongyang had issued warning of a “stronger and certain reaction” to the recent sanctions by US on six North Koreans for their involvement in the regime’s weapons of mass destruction and ballistic missile programmes.
(UNI)