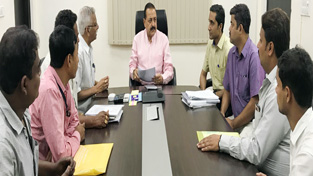 Excelsior Correspondent
NEW DELHI, Apr 3: Union Minister of State (Independent Charge) of the Ministry of Development of North-Eastern Region (DoNER), MoS PMO, Personnel, Public Grievances & Pensions, Atomic Energy & Space, Dr Jitendra Singh said here today that the Modi Government is sensitive to employees’ concerns and a number of decisions taken during the last four years, are aimed in the direction of addressing employees’ grievances and providing them a motivating environment.
Dr Jitendra Singh was speaking to a delegation of Bharatiya Mazdoor Sangh (BMS) led by M. Sudhakar Rao, Secretary General of Geological Survey of India Employees Sangh affiliated to BMS.
Dr Jitendra Singh lamented that a number of legislations and government bills, which were specifically meant to bring ease of working for government employees, could not be taken up in the Parliament because of the disruptions caused by the opposition, which led to virtual washout of this session. He cited the example of “Prevention of Corruption Act Amendment Bill” which was listed virtually in each day of Rajya Sabha business during this session and also in the last session, and had it been taken up and passed, it would have brought great relief and motivation for the government officials.
During the meeting, Dr Jitendra Singh reiterated that the Department of Personnel & Training (DoPT) is always open to suggestions from the government officials and tries its best to improvise the existing mechanism and rules accordingly. He said, nearly 1500 rules, which had become obsolete, have been done away in the last three years by this Government to enable ease of working and ease of governance.
The members of the delegation submitted two memoranda to the Minister. One of them sought to address the alleged discrepancy in framing of  Recruitment Rules (RRs) of the Non-Gazetted Group ‘B’ Assistants in the Ministry of Mines, Geological Survey of India. The other memorandum proposed the setting up of a Joint Consultative machinery for arbitration of Central Government employees.
Dr Jitendra Singh gave a patient hearing to the members of the delegation and held a detailed discussion on each of the issues raised. Thereafter, he  directed the Personnel Ministry to study the issues raised and report back to him with the feedback.