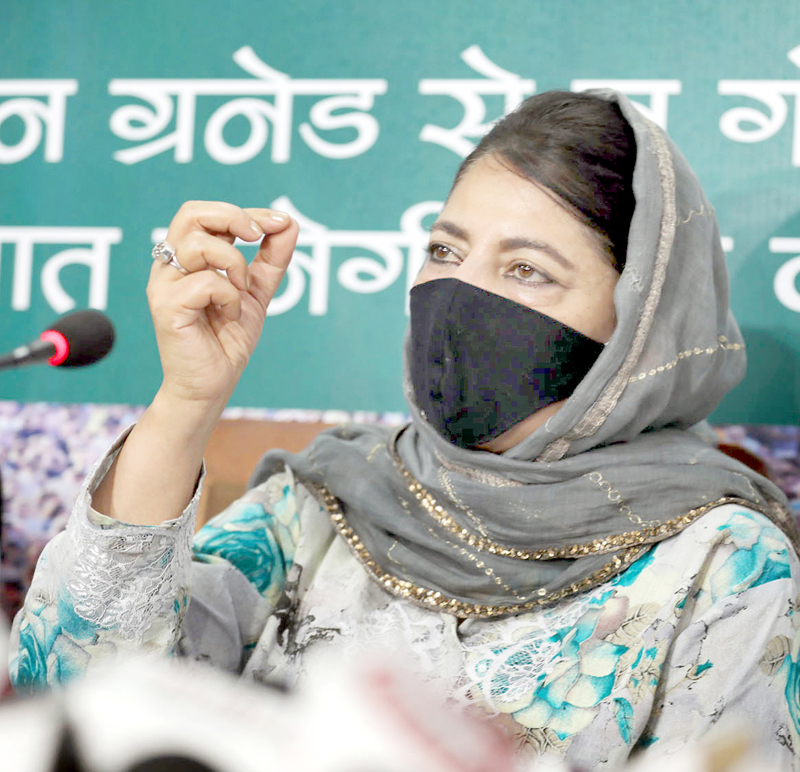 Says Govt can capture a man but not an idea

Nishikant Khajuria
JAMMU, July 12: Denouncing the Government action on dismissal of 11 employees including two sons of Hizb-ul-Mujahideen chief Sayed Salahuddin on sedition charges, PDP president and former Chief Minister Mehbooba Mufti said that criminalization of dissent and witch-hunting were taking the country back.

Click here to watch video
“I am not supporting anyone. But you can’t hold a child responsible for actions of his father unless and until you have proof,” she said while talking to media persons, here today.
Stating that these are not 11 people only but the Government has so far sacked 20-25 employees this year, Mehbooba Mufti said that one can capture a man but not an idea. “I have said that again and again, you can capture a man but not an idea. You have to address the idea as Vajpayee ji did. Witch-hunting, criminalization of dissent is taking our nation backward not forward,” she added.
PDP chief reiterated that unless and until Article 370 is restored, she wouldn’t be Chief Minister even if her party comes to power. “As an individual, this is a very emotional issue for me. I contested the first election taking oath under the Constitutions of India and J&K. I took both flags in my hands. So, until both the Constitutions are not be existing together, I have said I will not personally contest elections,” Mehbooba maintained.
“Articles 370, 35-A and Domicile laws were not given by a foreign country and event before the nation gave us these, Maharaja had brought it in to protect identity of Dogras, Kashmiri and all locals of J&K, not only Muslims. And when people decided to be part of India, these laws were upheld,” she reminded.
Alleging that motive behind scrapping 370 and 35-A was only to loot J&K, Mehbooba Mufti pointed out that people from outside were being given mining contracts and top positions at Chenab Valley Power Projects while J&K’s electricity and water were also going outside.
The PDP president alleged that there was no policy for governance as unemployment and inflation were rising. “Earlier, they used to say that J&K is backward, but we are ahead on several indices. But if their onslaught over economy continues, our situation will become worse than Gujarat as far as poverty is concerned,” she said and added that transporters are in trouble as they have to pay toll tax and what not while farmers are also agitating.
The former Chief Minister also criticized the Government decision on abolition of Darbar Move and claimed that the Maharaja had introduced this practice for encouraging interaction between people from Kashmir and Jammu regions. It (Darbar Move) is a social fabric. Kashmir people come here and make purchases. It is foundation of our brotherhood. Jammu is the only place in country having so many different cultures and communities like Hindus, Muslims, Dogras, Kashmiris, Gujjars, Sikhs, Paharis Christians etc living together peacefully,” she added.
In response to a query over contradictions in Gupkar Alliance, the PDP chief said that if an alliance partner does something different from others, PAGD has nothing to do with it as the alliance has come into existence on two issues; 370 and 35-A. “Gupkar Alliance has to remain strong as aspirations of people of J&K are attached to it,” she added.
On the occasion prominent social activist and Advocate Anil Sethi joined the PDP and expressed faith in policies and programmes of the party.