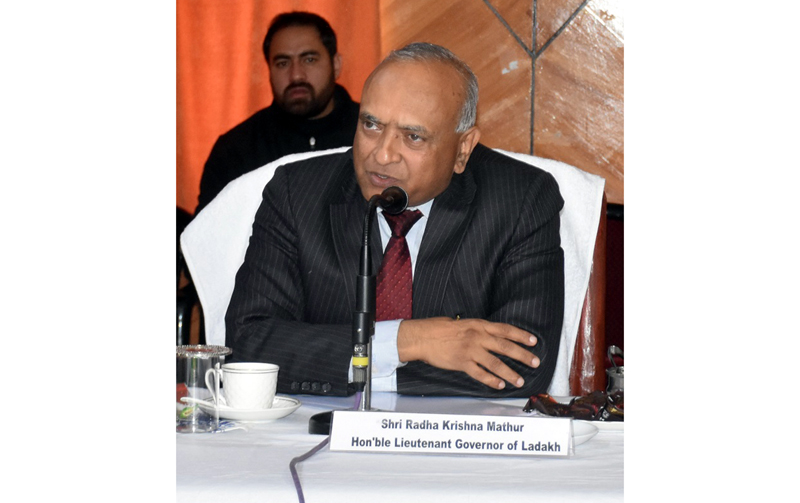 Sanjeev Pargal
JAMMU, Nov 12: Radha Krishna Mathur, the Lieutenant Governor of Union Territory of Ladakh today announced that the Lieutenant Governor, Union Territory Secretariats and Police Establishment of Ladakh will be established at both Leh and Kargil, the twin districts of the UT, and there will be no Durbar Move like arrangement.
He made the announcement at the end of two-day visit to Kargil this afternoon.
“It’s certainly not Durbar Move. There has to be Raj Bhawan. It’s not meant to be that…nowhere near that (the Durbar Move). You are at both places simultaneously all the time; that is the intention,” Mathur said.
Though the Joint Action Committee (JAC) Kargil didn’t outrightly announced suspension of the agitation following the Lieutenant Governor’s announcements, it admitted that its core concerns have been addressed but it would continue to agitate on issues like protection of land, jobs, culture etc.

Mathur was reported to have told the delegations of JAC Kargil and Ladakh Autonomous Hill Development Council (LAHDC), Kargil that the people and representatives of Kargil need not to worry and that their all genuine concerns will be addressed.
The Lieutenant Governor’s statement set at rest all doubts about the LG and Union Territory’s Secretariat as it clearly stated that these two Secretariats as well as the Police Establishment will be established in both Leh and Kargil districts and they will not be rotational like Durbar Move of the Union Territory of Jammu and Kashmir.
While in Jammu and Kashmir, the Civil Secretariat will be in Srinagar for six months of summer and in Jammu for six months of winter; in Ladakh, the Lieutenant Governor and the Union Territory Secretariat will be located at both the places including Leh and Kargil districts.
“The Lieutenant Governor and the Secretariat officials will visit Leh and Kargil as per requirement and there will be no fixed days or months for rotations,” sources said, adding that this way work in both the districts will not suffer.
Several Head of Departments (HoDs) have already been posted in the Union Territory of Ladakh with headquarters at Leh and Kargil.
When approached for comments, Sheikh Nassir Munshi, chairman of JAC Kargil, told the Excelsior that it was clear from the statement of Mathur that the Lieutenant Governor Headquarters, the Lt Governor’s Secretariat and Inspector General of Police (IGP) office will be established in both Leh and Kargil districts.
However, Munshi said, the JAC will now like to take LAHDC Leh representatives on board to settle the issues like protection of land, jobs and culture of both Leh and Kargil districts.
“We plan to hold joint meeting with the LAHDC Leh on these issues,” Munshi said admitting that their three major demands have been conceded by the Lieutenant Governor.
It may be mentioned here that the JAC Kargil had launched agitation across Kargil district demanding rotation of the Lieutenant Governor Secretariat and other major offices including the Administration Secretary Ladakh Affairs. The issues have been settled after today’s announcement of the Lieutenant Governor of Ladakh.
Some of the prominent political leaders in Kargil admitted that their major concerns have been addressed by the Lieutenant Governor today with his declaration that the LG Secretariat, UT Secretariat and Police Establishment offices will be established at both Leh and Kargil districts and not just Leh as was being anticipated by them earlier.
An official handout said that Lieutenant Governor, Union Territory of Ladakh, Radha Krishna Mathur during his first visit to Kargil met Council Members of LAHDC, Kargil.
The meeting with the representatives of LAHDC, Kargil was attended by Chairman and Chief Executive Councilor, LAHDC, Kargil Feroz Ahmad Khan, Executive Councilor for Social Welfare Aga Syed Mujtaba Mosavi, Executive Councilor for Tourism Phunsog Tashi, Executive Councilor for Works Aga Syed Abbass Razvi, Executive Councilor for Health Muhammad Ali Chandan and Councilors.
The Lt Governor also held a meeting with the district officers and met the Joint Action Committee (JAC) Kargil, various political, religious leaders, social groups and associations etc.
He said that the entire nation admires and value the patriotism and communal harmony of the people of Kargil and the sacrifices they have made for the nation. He said that the Government wants Kargil to prosper along with the rest of the nation and become a partner in the country’s economic progress. The recent decisions of the Government were meant to speed up their progress and the fund flow for development shall increase, he added.
Mathur stated that the operation of commercial aircrafts, AN 32 Courier Service, MI-17 and other helicopter services, opening up of Zojila pass till late winter etc shall be accorded top priority.
He also announced an exposure visit for the Executive Council members of both LAHDCs in near future. He assured members of the LAHDC Kargil that funds for completion of the Council Secretariat infrastructure would also be released in due course of time.
The Lt Governor stated that various administrative issues for efficient functioning shall also be addressed.