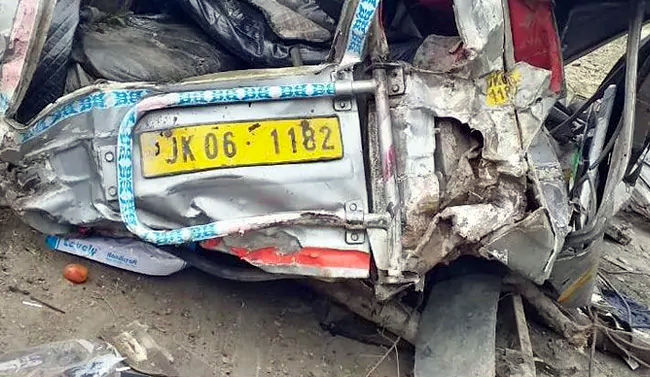 Mohinder Verma
JAMMU, Nov 12: Bizzare it may sound but it is a fact that Government has virtually remained unconcerned despite being aware of the causes behind ‘dance of death’ on the roads in the hilly districts of the Union Territory of Jammu and Kashmir and shortcomings in the system. This has become amply clear from the today’s horrendous accident in Doda district which claimed 16 lives and rendered one person critically injured.
Moreover, the tragedy which has befallen on several families has once again put a big question mark on the performance of several Government agencies, which otherwise are supposed to work in tandem to bring down the number of tragic accidents.
In response to the High Court directions in a Public Interest Litigation (PIL) titled Intakhab Ahmed Qazi Versus State of Jammu and Kashmir and Others filed following tragic road accidents in Keshwan area of Kishtwar and Peer-ki-Gali area of Mughal Road few months back, which claimed more than 30 lives, the Traffic Police Department, in a detailed affidavit, had identified 15 vulnerable roads in Doda, Kishtwar and Ramban districts, which include Khelani-Goha-Marmat on which tragic accident took place today.
What apt attention was being paid by all the concerned authorities towards these roads after their identification as vulnerable has been exposed by this tragic accident. The mishap took place due to the sheer negligence of the driver has clearly established that there was no focus on movement of passenger vehicles on this one of the vulnerable roads.
In the affidavit, the Traffic Police Department had also admitted before the High Court that there was no adequate manpower for all the 128 link roads of erstwhile Doda district but all the Traffic Police personnel were given strict directions to aggressively launch enforcement drive particularly against the over-loading, drunken driving, use of mobile phone while driving and over-speeding.
“However, strength of the Traffic Police for these link roads as well as 15 vulnerable roads has not been increased till date and this clearly indicates that after admitting shortage of manpower no remedial measures were taken”, official sources said while disclosing that in Doda district there are only 39 Traffic Police personnel including one DySP, one Inspector, one Sub-Inspector and one ASI.
Had drive against over-speeding and negligent driving been launched aggressively as was claimed before the High Court there was all possibility of averting today’s tragic accident. “In the absence of adequate Traffic Police personnel the cops posted in the Police Stations and Police Posts are also required to keep watch on violation of rules by the private passenger vehicles but this aspect has generally remained confined to the official statements only”, sources said.
Moreover, in the affidavit it was stressed by the Traffic Police Department that hungry routes of the hilly districts should be identified for deployment of enhanced number of public transport vehicles particularly of the State Road Transport Corporation as per the population density which will help in checking overloading and minimizing the chances of road accidents.
However, SRTC vehicles have not been deployed for most of the 15 vulnerable roads in the erstwhile Doda district despite numerous announcements in this regard by the concerned Government agencies, sources informed.
The most shocking aspect of today’s tragic road accident was that none of the concerned Government agencies was in a position to answer some important questions—-Was the driver of the ill-fated vehicle was actually physically fit for plying of commercial vehicle in the hilly areas? Was the 14 years old vehicle mechanically fit for being operated in the hilly terrain and Whether over-speeding was noticed either by the Traffic Police or Executive Police?
“All this clearly indicates that while Government is aware of the causes behind the tragic road accidents and openly admits inadequacies in the system to check the same, it is not showing any seriousness in taking the remedial measures”, sources said, adding “had this not been the scenario action would have been taken on the issues flagged before the High Court by the Traffic Police Department”.