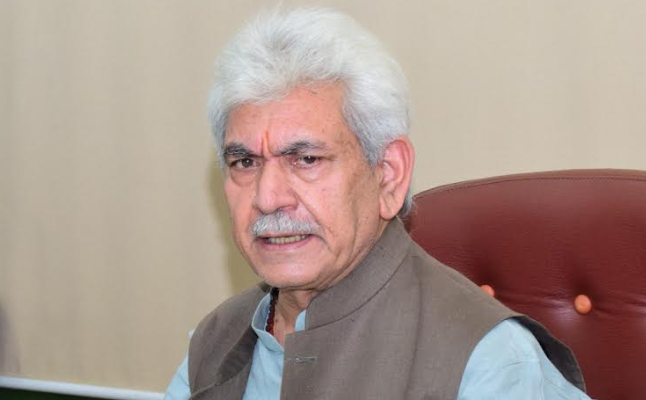 JAMMU, May 19: The Union Ministry of Home Affairs (MHA) has deputed 150 companies of Central Armed Police Forces (CAPFs) to Jammu and Kashmir in view of surge in targeted killings and preparatory arrangements for annual pilgrimage of Shri Amarnath Ji beginning June 30 while Lieutenant Governor Manoj Sinha tonight returned to Srinagar after five-day visit to New Delhi and reviewed security situation in the Valley with top brass of civil and police administrations at the Raj Bhawan soon after his arrival.
Official sources told the Excelsior that the MHA has deputed 150 companies of paramilitary forces to Jammu and Kashmir after Union Home Minister Amit Shah reviewed the Valley situation at a very high-level meeting in New Delhi on May 17. Eighty five percent of the deployment will be made in Kashmir and 15 percent in Jammu, they said.
“Immediate deployment of companies in vulnerable areas of Jammu and Kashmir is aimed at curbing targeted killings in the Valley which have created sense of fear among the people,” sources said, adding the deployment will be made in vulnerable areas.
Security in the colonies where Kashmiri Pandit employees and others are putting up will be further strengthened in view of militants making them their targets.
As per the sources, all 150 companies (nearly 15,000 paramilitary personnel) will reach Jammu and Kashmir by June 2 and deployed in the areas finalized by local police administration in consultation with top brass. The deployment will start immediately.
Some of the companies will also be deployed in the routes to be used by Shri Amarnath pilgrims for sanitization of the tracks well in advance.
“Additional companies of paramilitary forces for annual pilgrimage of Shri Amarnath Ji will also start arriving shortly,” sources said, adding that exact number of companies which will be required for ensuring peaceful yatra will be known by next week. However, the Union Ministry of Home Affairs has already promised that there will be no dearth of additional companies for the pilgrimage which has to be smooth and secure.
Meanwhile, Lieutenant Governor Manoj Sinha returned to Srinagar this evening after five days visit to New Delhi during which he met Defence Minister Rajnath Singh and Home Minister Amit Shah and briefed them on security situation in Jammu and Kashmir especially in the Valley in the wake of targeted killings.
Soon after his arrival in Srinagar, Sinha met top officers of civil and police administrations and took review of security situation in the Union Territory especially the Valley.
Senior officers were reported to have given detailed briefing to the Lieutenant Governor on the situation and steps being taken to neutralize the militants and their commanders to prevent targeted killings and other acts of violence ahead of Shri Amarnath Ji pilgrimage.
“Decisions taken during the security review meeting of Amit Shah in New Delhi on May 17 were also discussed at the meeting for implementation especially with regard to Shri Amarnath Ji pilgrimage,” sources said.
The meeting lasted an hour.
During his visit to New Delhi, Sinha also met Defence Minister Rajnath Singh regarding arrangements for Shri Amarnath Ji pilgrimage.
Shah had called for a “hassle-free” journey for the pilgrims saying this is a priority of the Modi Government. He stressed for enhancement of mobile connectivity along the yatra route as he directed that earth moving equipment should be placed at vantage points to clear the route in case of landslides.
This is the first Yatra after the COVID-19 pandemic.
Pilgrimage couldn’t be held in 2020 and 2021 due to COVID-19 while it was cut short by about a fortnight in 2019 ahead of August 5, 2019 decisions of the Central Government.