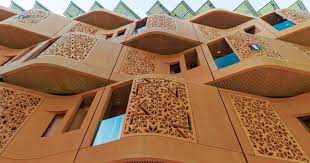 Canberra, Sept 16: “Modern” styles of architecture using concrete and glass have often usurped local building techniques better suited to parts of the world with hotter climates. Now some architects are resurrecting traditional techniques to help keep buildings cool.
From western Europe to China, North Africa and the US, severe heatwaves brought drought, fire and death to the summer of 2022.
The heatwaves also raised serious questions about the ability of existing infrastructure to cope with extreme heat, which is projected to become more common due to climate change.
Yet, for thousands of years, people living in parts of the world used to high temperatures have deployed traditional passive cooling techniques in the way they designed their buildings.
In Nigeria, for example, people have long used biomimicry to copy the style of local flora and fauna as they design their homes, according to Anthony Ogbuokiri, a senior lecturer in architectural design at Nottingham Trent University in the UK.
But in the 20th century, cities even in very hot climates began following an international template for building design that meant cities around the world, regardless of where they were, often had similar looking skylines.
Ogbuokiri calls this “duplitecture”, and says it “ramped up the cooling load” due to an in-built reliance on air conditioners.
Alongside this, there was a massive boom in the use of concrete, particularly after the second world war when the Soviet Union and the US started gifting their cold war allies concrete technology.
“It was a competition both to discover who actually mastered concrete and who was better at gathering the materials, the people and the energy to make concrete,” explains Vyta Pivo, assistant professor of architecture at the University of Michigan in the US.
But too much concrete can contribute to the phenomenon of urban heat islands, where heat is concentrated in cities. Concrete is also a considerable contributor to global carbon emissions.
Some architects and researchers are working to rehabilitate and improve traditional passive techniques that help keep buildings cool without using energy.
Susan Abed Hassan, a professor of architectural engineering at Al-Nahrain University in Baghdad, Iraq, focuses a lot on windcatchers in her work, a type of chimney which funnels air through houses to keep them cooler in hot climates.
She’s now looking at how to combining underground water pipes with windcatchers to enhance their cooling effects. (The Conversation)
(PTI)