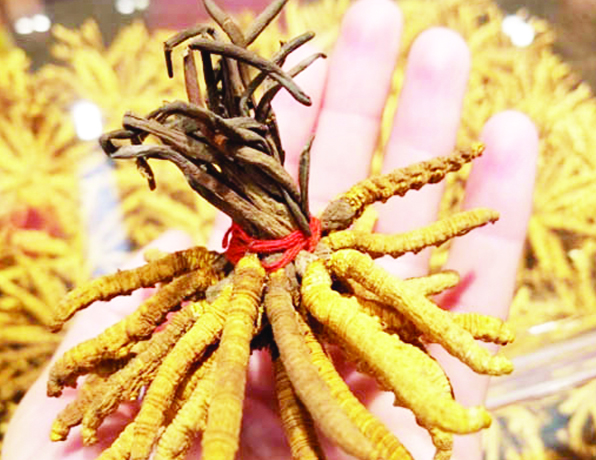 Dr. Vikas Sharma, Abeeda Mushtaq
Keeda jadi, one of the rarest fungal species in whole world known as the mysterious “half-caterpillar-half-mushroom” possessing anti-microbial, anti-oxidant, anti-viral, anti-diabetic, anti inflammatory, anti-cancer, anti-fibrotic, anti-HIV, anti-malaria, anti-depression, anti-arteriosclerosis and anti-osteoporosis activities. It is also referred to as Himalayan Viagra and is so costly that the price is compared to nothing less than gold, platinum and diamond. The price of the herb is Rs 3-5 lakhs in the Indian market whereas in the international market, its price is pegged around Rs 20 to 25 lakhs per kg. The Division of Biochemistry, Faculty of Basic Sciences has recently established a laboratory for the cultivation of Keeda Jadi.
Cordyceps militaris, commonly known as Keeda Jadi, is a breed of mushrooms, belongs to the family Cordycipitaceae and class ascomycetes. It is an entomopathogenic fungus and is one of the rarest fungal species in whole world known as the mysterious “half-caterpillar-half-mushroom”. When these fungi attack their host, they replace its tissue and sprout long, slender stems that grow outside the host’s body. This mixed morphology, a fungal head riding a caterpillar body, earns Cordyceps its Indian name, Keeda Jadi or insect herb. In Tibet, it is known as yartsa gunbu which means the winter worm, summer grass or Caterpillar fungus.
It is also referred to as Himalayan Viagra and “the scarlet caterpillar” due to its vibrant color and slender appearance. Caterpillars take 5 years to grow underground in Alpine grass and shrub lands before finally pupating (from larva) and are attacked by the fungus while feeding on roots. It finally takes the shape of 5-15 centimeter columnar mushroom out of the forehead of the caterpillar. It is a highly valued fungus which thrives at altitudes above 3,800 meters above MSL, in the cold, grassy, alpine meadows on the mountainous Himalayan plateau. The distribution of these fungi is cosmopolitan, but many occur in the Tibetan Plateau of China and surrounding high-altitude grasslands of Nepal, Bhutan and India. Its morphological diversity and adaption to a wide range of host insects probably contribute to its presence in diverse geographical regions and ecological zones in the world. Its most common hosts in nature include lepidopteran larvae (caterpillars) and pupae; other infrequent hosts being coleopteran, hymenopteran, dipteran insects and because of the difficulties involved in harvesting, rarity and remarkable healing power, it has been expensively priced. Despite its cost and rarity, the unprecedented medicinal applications of Cordyceps have made it a highly valued staple component of the traditional Chinese and Tibetan medicine. The mushroom is club-shaped and the surface appears punctured. The inner fungal tissue is whitish to pale orange. Nutrients like proteins, peptides, amino acids, vitamins B-1, B-2 and B-12 are found in abundance in this fungus. Its most prized compound is the energy-giving cordycepin and is molecularly similar to adenosine, which exists in all human cells. It has been added to culinary dishes and steeped into tea as a way to support healthy stamina and energy on a cellular level. It has anti-microbial, anti-oxidant, anti-viral, anti-diabetic, anti inflammatory, anti-cancer, anti-fibrotic, anti-HIV, anti-malaria, anti-depression, anti-arteriosclerosis and anti-osteoporosis activities. It has neuroprotective, reno-protective and lung protective properties and is useful in treatment of chronic bronchitis, kidney disorder and renal hepatitis. Cordycepin has proven anti-tumor properties and helps reduce tumor size. It boosts cellular energy, strengthens cardiac muscles, helps in adjustment of the respiratory system by curing asthma and expansion of bronchus. It is also known to enhance bone marrow and generate platelets. Keeda Jadi is used to treat cough, chronic bronchitis, respiratory disorders, nighttime urination, male sexual problems, anemia, irregular heartbeat, high cholesterol, liver disorders, dizziness, weakness, ringing in the ears, unwanted weight loss and opium addiction. It is also used for strengthening the immune system, improving athletic performance, reducing the effects of aging, promoting longer life and improving liver function in people with hepatitis B. Some people use keeda Jadi as a stimulant, a tonic and an “adaptogen,” which is used to increase energy, enhance stamina and reduce fatigue. It is also one of the world’s most expensive fungus. The fungus is so rare that it has entered the International Union for Conservation of Nature’s (IUCN) Red List of Threatened Species.
(The authors are from the Division of Biochemistry, SKUAST-Jammu) 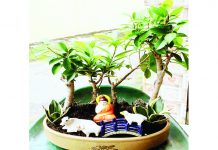 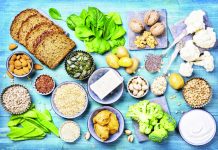 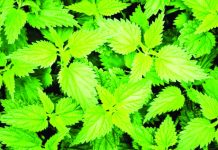 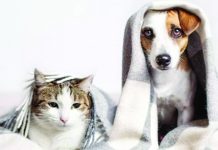