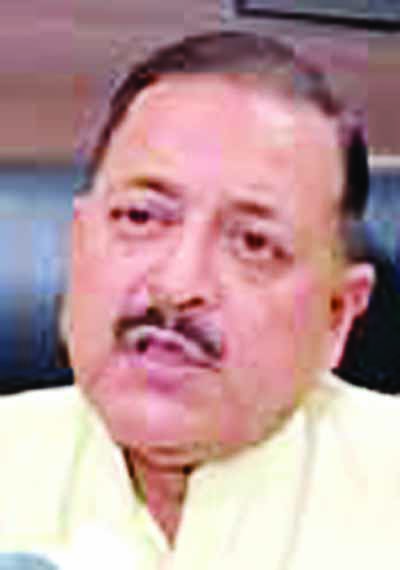 Avtar Bhat
JAMMU, Oct 23: Union Minister in PMO, Dr Jitendra Singh while taking a strong dig at Peoples Democratic Party (PDP) chief and former Chief Minister of J&K, Mehbooba Mufti for stating that she will not carry the National Flag nor she is interested in contesting elections till August 5 last year decisions are revoked, said this shows the duplicity of Kashmiri centric politicians.
Talking to this reporter, Dr Jitendra Singh said that the PDP chief should be asked that if she believes in mainstream politics then why she has reservations in carrying the tricolor of India. Such statement of the PDP leader is not going to carry any weightage now as the leaders’ like her have been since exposed before the masses, he added.
“If they are in mainstream then what problem they have in carrying the National Flag and where her credibility stands by saying now that she will not carry the National Flag as I think she should have no reservations in carrying the tricolor’’, he said. . It has been a problem with Kashmiri politicians that when they are in power they swear by unity and integrity of India and say Bharat Mata Ki Jai but as soon as they are out of power they start swearing by Pakistan, question national integrity & unity and integration of J&K with India, he added.
“This shows the duplicity of the Kashmir centric politicians and they have been abundantly exposed for this duplicity before the people now”, he said, adding this way they are trying to hunting with hounds and run with hare.
But they have been exposed before the public and even the common man of Kashmir is no longer being carried away by such cheap and misleading statements of these politicians, Dr Jitendra Singh said, adding the aspirations of common man of Kashmiri especially the youth of Valley have increased for the last three and four years under the motivational approach of Prime Minister, Narendra Modi and people of Kashmir want to be part of Modi’s New India and new Jammu and Kashmir.
Dr Jitendra Singh said that the youth of Kashmir wants to be the part of mainstream so that Jammu and Kashmir should not lag behind in the field of progress and development from the rest parts of the country. Lambasting the Kashmir centric politicians for their approach, he said this way once again the opportunism of these disgruntled and self centered politicians has come to fore but it will no longer make any impact on the people of the Valley who have already seen through their game plan.
While strongly defending the decision of Modi Government in annulling the controversial Articles 370 and 35 –A, he said “the decision of August 5 and 6 last year regarding abrogation of Articles 370 and 35 –A was taken with consent of Parliament which represents 135 crore people of the country’’.
“The right to doing away with the Article 370 and 35-A lies with the Parliament and President of India who are the supreme Constitutional bodies and not with the Kashmir based politicians who are misleading the people on this account every now and then’’, he added.
Dr Jitendra Singh criticized the role of both PDP and National Conference (NC) in this regard and said that the two or three families are issuing the misleading statements to hoodwink the public opinion but the people of Kashmir are not going to trust them now as these politicians have since been exposed for their duplicity.
Reacting to so called Gupkar declaration and formation of front by some Valley based parties recently, Dr Jitendra Singh said that they are six parties with six members only in the Front. While NC has two members, PDP and Communists have one member each besides one member belongs to Peoples Conference (PC) which can hardly make any difference, he added.