Excelsior Correspondent
JAMMU, Oct 19: The country is indebted to the indomitable courage and outstanding service of the BSF personnel as their phenomenal virtues confidence in countrymen while the border guarding force is on duty safeguarding India round the clock.
This was stated by first Sadr-e-Riyasat and former Member Parliament, Dr Karan Singh during his visit to Suchetgarh Border Outpost here. Dharmarth Trust’s president, Senior Advocate Ajay Gandotra and secretary Dr Gopal Parthasarthi were also present.
The nonagenarian leader also visited the ancient Raghunathji Temple at Zero Line on the Indo Pak border at Suchetgarh BoP. He performed Special Pooja and held interaction with the local people to get firsthand information about their issues and aspirations.
Earlier, the veteran leader was given a rousing reception by the people of the area as well as by the Deputy Inspector General (DIG) of Border Security Force, Surjeet Singh. Dr Karan Singh was also taken to Zero Line by DIG BSF. He was briefed about the present situation along the International Border and various measures which the border guarding force takes to maintain vigil and security. Later, BSF officials screened a video of the first retreat ceremony which was held recently at Suchetgarh border. Dr Karan Singh anticipated that the launch of retreat ceremony will boost tourism in the region and will ensure socio-economic development of Jammu.
Dharmarth Trust’s president suggested for installing the photographs of all the Dogra Rulers including Maharaja Gulab Singh, Maharaja Ranbir Singh, Maharaja Partap Singh and Maharaja Hari Singh at the Conference Hall of BSF at Suchetgarh with brief history of their contribution in setting up this majestic empire of J&K and their role in ensuring development and social justice in the erstwhile State. 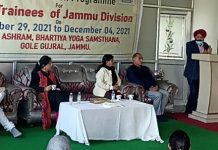 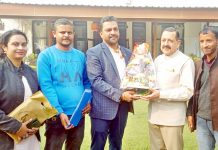 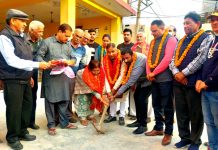