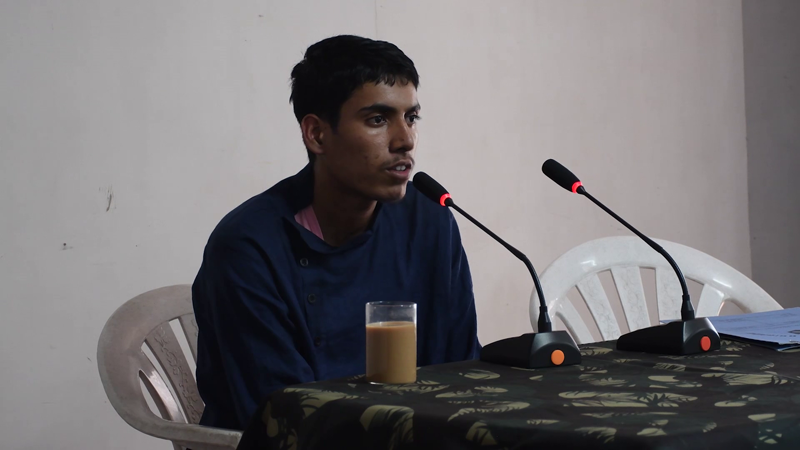 Fayaz Bukhari
SRINAGAR, Sept 29: The Pakistani militant who was captured by Army while infiltrating along the Line of Control (LoC) in Uri sector this week said that the Pakistan army helped them in infiltration and they were tasked to conduct a major strike in Kashmir.
The 18-year-old Ali Babar Patra was captured during an operation launched by the Army along the LoC in Uri sector this week while his colleague was killed in the gun battle.
Patra told interrogators that the Pakistan army was helping militants to infiltrate into Jammu and Kashmir for violence and their personal benefits by spreading misinformation and brainwashing the youth.

Click here to watch video
In the video that was released by the Army, he said: “Whatever we were told about Kashmir by LeT and ISI is wrong. When I was being taken in a vehicle, I saw hustle-bustle in the markets and people seemed happy, there seemed peace in the environment”.
He said that the conduct of Indian Army is way better than that of the Pakistan army. “I now believe that there is peace and tranquillity in Kashmir. People back in Pakistan exploited me and sent me over to Kashmir”, he said.
Patra said that Pakistan army, ISI and LeT are doing propaganda in the name of Kashmir that people here are being killed, that there is bloodshed going on in Kashmir, but the reality is opposite to that.
“I want to tell my mother that the Indian Army treated me well. I am requesting ISI, LeT’s area commander to take me back home to my mother as soon as possible”, he said.
While giving details about himself, the captured militant said: “My name is Ali Babar Patra and the name on my entry card is Imdad Ullah. I am 18 years old and I come from Dipalpur, District Okara, Punjab, Pakistan. My father’s name is Muhammad Lateef and my mother’s name is Shamima Bibi. I also have an elder sister who goes by the name Samaira. My father died in 2014 and since then the financial condition of my family is poor, and due to that, I had to quit my studies”.
“I went to work in a factory in Sialkot where I met Anas. He has been tasked to gather men for LeT and ISI. Keeping in view my condition, I went with him and he gave me Rs 20,000 and promised Rs 30,000 more. He handed me over to ISI, and ISI further handed me over to Pakistan army. Pakistan army trained me at Camp Khyber Delihabibullah. We were taught how to operate AK-47. After training, details were sent to the LeT area commander who selected me”, he said.
“We were made to draw the map of Baramulla/ Pattan and then we were taken to Pakistan army’s Sher Camp where were given AK-47 rifles, grenades and other ammunition”, he said.
“On the night of September 18, we cut the fencing. I along with Anas were first to enter and soon we were confronted by the Indian Army’s patrolling party. Others were frightened and four among us fled back, while I was surrounded and was asked to surrender”, he said.
“Anas fired back due to which one soldier of the Indian army was injured, and in the ensuing firing, Anas was killed. I surrendered and the army did not even touch me. I was given good food”, he said.