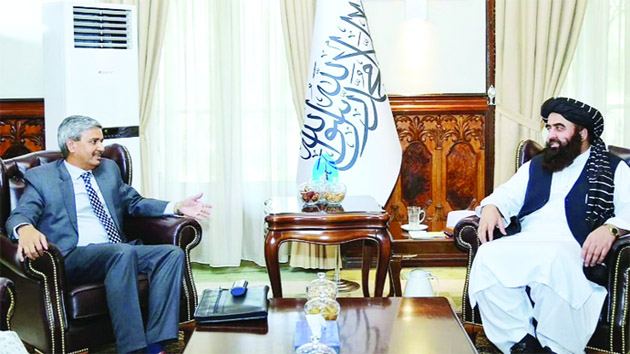 Anand Kumar
India was forced to quit Afghanistan once the US decided to leave that country after nearly two decades. Americans had failed to resolve any of the issues that they had set out to do in Afghanistan. Taliban which was removed from power in the wake of 9/11 came back to rule the country. Though al-Qaeda was no longer as powerful as it was when 9/11 happened, the void was filled by other extremist groups like the Islamic state and TTP. Of course, India centric terror groups like the Lashkar-e-Taiba (LeT) and Jaish-e-Mohammed (JeM) kept thriving. The crumbling of US sponsored Ashraf Ghani regime ensured that chaos reigned supreme in Afghanistan. In these circumstances India had no choice but to leave Afghanistan along with its diplomatic staff. This also discontinued India’s relationship with the Afghan people, who it was trying to help under the conditions of relative peace.
But as dust settles in Afghanistan and Taliban continues to hold the reins of power in that country, India has decided to take a relook at its Afghanistan policy. India is once again trying to re-establish its “historical and civilisational relationship with the Afghan people” as pointed out by the India’s Ministry of External Affairs. This approach also implies that India does not recognize Taliban setup in that country.
Actually, India had opened diplomatic channels with Taliban only few days after the American exit. The Indian Ambassador to Qatar, Deepak Mittal, met Sher Mohammad Abbas Stanikzai, then the head of Taliban’s Political Office in Doha on 31 August 2021. Subsequently, Russia invited India along with other stakeholders to discuss the way forward in Afghanistan. The issue of resuming stalled projects in Afghanistan and Turkmenistan-Afghanistan-Pakistan-India (TAPI) pipeline project figured during the first ever India-Central Asia Summit in January 2022.
A number of humanitarian crises occurring in Afghanistan also underlined the need for India to have a diplomatic presence in that country. After Taliban came to power in August 2021, Afghanistan faced a severe food crisis. India helped Afghanistan by sending 30,000 tonne of wheat. It has also signed an agreement with the World Food Programme (WFP) for the distribution of 50,000 tonne of wheat in that country. The wheat supply was held up by Pakistan but has since been allowed. India has also send 13 ton of medicines, 500,000 doses of Covid-19 vaccines and winter clothing. To inoculate the Afghan refugees in Iran, one million doses of the Covaxin vaccine have been sent there. India’s help was timely as subsequently situation only worsened worldwide because of the Russian -Ukraine war and there was shortage of grain in many places.
Providing help to Afghan people required assessment of the security situation in that country. The lack of security was the main reason why Indian diplomats had left in the aftermath of Taliban takeover in Afghanistan. With this objective an Indian team had visited Afghanistan from June 2, 2022. It also wanted to oversee the delivery operations of Indian humanitarian assistance to Afghanistan and met with senior members of the Taliban. During this visit a decision was taken to re-start Indian diplomatic presence in Afghanistan. Taliban welcomed this decision and assured security to Indian diplomatic staff. They have also promised not to allow space to LeT and JeM.
The opening of Indian embassy even at a skeletal level also helps Taliban. It gives a message to the world that the security situation in Afghanistan is under control and diplomatic missions can function there. This may not bring legitimacy to Taliban, but it will definitely reduce hostility of international community towards them.
Obviously, this development has not been liked by Pakistan. Pakistan thought that under Taliban it has increased its strategic depth in the region. But this notion had suffered a setback after clashes took place on the Durand line. Return of India to Afghanistan would make Pakistan further uneasy. It has already started a narrative that India and Taliban can’t gel. Perhaps to worsen the security situation and deter India from coming back an attack was launched on gurdwara Karte Parwan in Kabul. This attack has been claimed by ISKP which has more than 50 percent of its cadre from Pakistan and is closely linked to the GHQ in Rawalpindi. Pakistan is also unhappy with the Taliban’s decision to send soldiers of Afghan National Army for training in India. But Pakistan is forgetting that India has a longstanding relationship with the people of Afghanistan and is willing to help them no matter who is in power.
A number of countries like China, Pakistan and Russia are already active in Afghanistan. In a situation like this India’s staying out would have proved disadvantageous to its strategic interests. Meanwhile, Afghanistan was also struck by a major earthquake in which over a thousand Afghans have died and many more are injured. India was once again one of the first responders in the crisis.
It also underlined the need for India to have a diplomatic presence in Afghanistan. The Taliban’s coming back to power had posed a policy challenge to India and the country did not know what kind of relationship would be proper. But few months down the line it appears that complete discontinuation of diplomatic relationship would be like leaving the field open for hostile powers like Pakistan and China. The presence of Taliban as rulers of Afghanistan is a reality and India has to find a way to navigate in the environment.