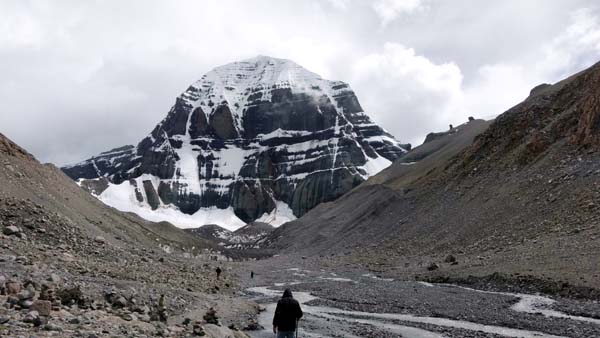 S K Raina
Like every year, this year also the Government of India, Ministry of External Affairs is organising the annual yatra to the Holy Mount Kailash and Manasarovar Lake situated in Tibet Autonomous Region (TAR) of China. The yatra will be performed during the months of June, July and August.
Holy Kailash is not only auspicious to Hindus, it is also a place for reverence to Jains, Buddhists and Bon (religion prevailing in Tibet before advent of Buddhism and still practiced by some). This makes it one of the oldest places of pilgrimage.
As per Hindu text Mount Kailash is where Lord Shiva resides with his family and Lake Mansarovar is discribed as a Holy Lake where Shiva and Indra descend to swim. This Godly home must be visited once in a life time. In Jain holy text Mt. Kailash is known as Mt Meru.
Along the parikkrama one can also have darshan of Gouri Kund. Yatries collect water from Gouri kund and Manasarovar Lake which is considered very auspicious. Two night halt is allowed at Manasarovar after the darshan of Holy Kailash to allow yatries to bathe in the holy water and recover some energy. A yagna is also performed at the shore of the holy Lake and Prasad distributed.
Enroute yatries can also have darshan of OM Parvat near Nabhidhang on Indian side and Rakshas tal on the Chinese side. Rakshas tal is only 2 kms from Mansarovar and it is said that Ravana did his tapasya at this place to get favour from Shiva. Yatries are not allowed to take bath in this lake.
There are two approved routes for undertaking this pilgrimage. First route is through Lipulekh Pass (Uttrakhand) and the other through Nathu La pass in Sikkim. Last year yatra through Nathu La pass was cancelled due to Doklam standoff.
The yatra through Lipulekh pass is undertaken partly by road transport and partly on foot or by hiring pony. The yatra through Nathu La pass is mostly performed by road transport, except for the parikkrama of Holy Mount Kailash which is done on foot or hiring a pony.
Usually 18 batches of pilgrims are allowed through Lipulekh Pass and 10 batches of pilgrims through Nathu La Pass. Itinerary indicating date wise send-off and return of each batch from/ to Delhi is available on the website. The number of yatries in each batch is restricted to 60.
Citizens of India having a valid Passport and between the age of 18 and 70 years can apply for this yatra. The pilgrims are required to be physically fit and mentally strong as the journey will take them through some challenging environment consisting of rough tracks, high altitude, peaks, streams, waterfalls, etc.
The selection of yatries is done through draw of lots. Applicants can also give their preference for yatra route. For Lipulekh pass route 24 days and for Nathu La pass route 21 days are assigned for yatra.
A Liaison Officer from MoEA accompanies the yatries for the entire journey. He carries with him the Group Visa issued by Chinese Embassy. He also carries with him necessary medical kit and does liaison work with the Chinese on the Tibetan side of the yatra.
The arrangement for yatra on Indian side is done by Kumaon Mandal Vikas Nigam (KMVN) for Lipulekh pass and Sikkim Tourism Development Corporation (STDC) for Nathu La pass. The arrangement for only boarding and lodging is done by Chinese on Tibetan side while arrangement for food is made by yatries themselves by engaging cooks and buying provisions at Taklakot (also called Purang), Tibet. Payment for the same is to be made by the yatries.
The estimate cost of yatra through Lipulekh pass is Rs 1.60 lakh and that from Nathu La pass Rs 2.00 lakh approx. There is no financial assistance from GOI and all expenses are to be borne by yatries themselves. Certain state governments provide varying amounts of incentive (Rs 30000 to Rs 1.00 lakh) to the yatries from their states, after they have completed the yatra. Some religious organisations also provide some incentive in order to encourage people to proceed on this life time experience.
At the time of send-off a farewell function is organised by Delhi Government to felicitate yatries. The function is attended by a Minister from Delhi Government who meets each yatri and conveye his good wishes. When I had a chance to meet the Minister, I was surprised when the Minister informed me that he was very happy to see a yatri from J&K, which as per him was very rare. The Delhi Government also paid Rs 4000 to all yatries who undertook the yatra last year, as incentive. The amount was credited to bank accounts of yatries.