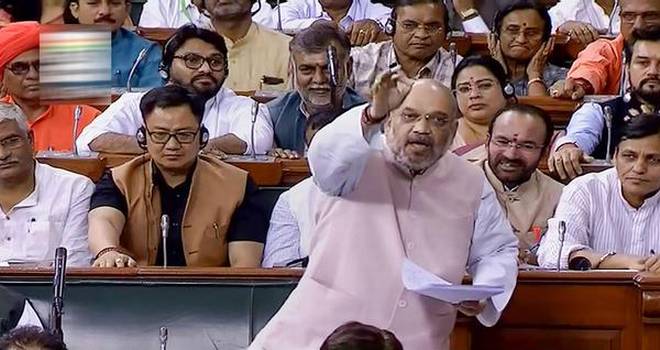 Sanjeev Pargal
JAMMU, July 24: Union Home Minister Amit Shah today declared that there should be stringent laws against terrorism as the Government’s primary aim is to wipe out the terror even as the Lok Sabha approved amendments in Unlawful Activities Prevention Act (UAPA) under which an individual can be declared as terrorist.
“Activists who help terrorists, should be labeled as terrorists or not”? Shah asked the members in the Lok Sabha as he strongly defended amendments in the anti-terror law and said that all those who indulge in terrorist activities, should be labeled as a terrorist. A terrorist, he said, has violence in his mentality. “It’s not about how many terrorist organizations are banned. Terrorists have to be stopped to stop terrorism.”
Asserting that no matter which side of the House one sits, they are against terrorism, Shah said the laws to deal with terrorists should be stringent. He told the House that former Prime Minister Indira Gandhi had brought this law and the present Government has just come out with amendments.
“Time has come for the global community to take up the fight against terrorism in right earnest. We have given the NIA power only for cases over which it has jurisdiction. When it comes to an anti-terror fight, we should rise above party politics,” the Home Minister said and reminded the Opposition members that the law was brought by the UPA and if the federal structure has been spoiled, it has been spoiled by the UPA.
Reiterating the zero tolerance policy of the Modi Government against terrorism, Shah said the objective of the proposed amendments is to facilitate speedy investigation and prosecution of terror offences and designating an individual as terrorist in line with the international practices.
“An individual’s psychology is the birth place of terrorism, rather than an institution. If, in the first place, an individual is stopped from attracting other individuals into terrorism by providing ideological and financial support, this menace can be finished,” he said.
Hence, designating an individual as terrorist, after following the due process of law, is of “prime importance” to nip terrorism in the bud, he added.
The anti-terror law, so far, only had provisions to ban groups as individual groups, not individuals.
The Bill additionally empowers the officers of the NIA, of the rank of Inspector or above, to investigate cases. Under the Act, the investigation may be conducted by officers only of the rank of Deputy Superintendent or Assistant Commissioner of Police or above.
Shah said there are no changes being made in arrest or bail provisions.
Therefore, it is clear that there will be no violation of fundamental rights of any person, he said.
Also, the burden of proof is on the investigating agency and not on the accused. This provision has not been changed, he added.
Defending the proposed amendment to give powers to Director General, National Investigation Agency (NIA) to attach properties acquired from proceeds of terrorism, Shah said a strict law is fruitful only when it is practically implementable.
Currently, the law requires that NIA take prior permission from the respective State DGP to start investigation in terror cases. This delays the process, he said. The Minister said that the amendment about attaching properties acquired through proceeds of terrorism is being proposed in order to expedite investigation in terror cases and is not against the federal principles.
He defended amendments to the anti-terror law, saying it was essential to keep law enforcement agencies one step ahead of terrorists. He also asserted that anti-terror law would not be misused and used only to root out terrorism.
He also said that provision in UAPA (amendment) bill to designate a person suspected to have terror links as terrorist is necessary to root out terror.
Hitting out at the Congress for opposing the amendment, he said if the UPA was correct in amending anti-terror laws in their tenure, then so is the NDA.
The Government fights terrorism and it should not matter which party is in power, Shah said, referring to amendments made in anti-terror laws by successive Governments.
The Congress and TMC boycotted the proceedings ahead of voting on the bill.
“What can we do, if you are boycotting the proceedings as you are angry over vote bank,” Shah said.
The Home Minister said the provision in UAPA (amendment) bill, which was later passed in the Lower House by a voice vote, to designate a person suspected to have terror links as terrorist is necessary to finish the terrorism.
PTI adds:-
During a division of votes, demanded by AIMIM’s Asaduddin Owaisi for consideration of the bill, as many as 287 MPs supported it and only eight opposed it.
“Radical preachers are propagating ideology of hate and terrorism,” Shah said.
If somebody indulges in terrorist activities then definitely the NIA will seize his computers and other devices, he added.
Speaking on the bill, Karti Chidambaram(Congress) accused the Government of destroying the federal structure and individual liberty by the Unlawful Activities (Prevention) Amendment Bill, 2019.
The member said he wondered whether such a stringent law would have prevented Pathankot or Pulwama attack.
Satya Pal Singh (BJP) said to deal with terrorism, “we need different kind of laws”.
Shiv Sena member Vinayak Raut said this is the first time that Amarnath Yatra has happened without any incident. Also, he added, this was for the first time when a Home Minister (Amit Shah) visited Jammu and Kashmir and there was no opposition.