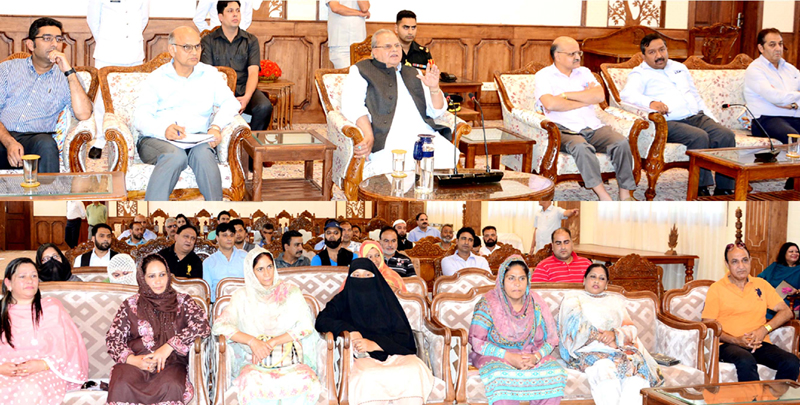 Assured them full support of the Government in their functioning

Srinagar : Governor Satya Pal Malik today met the Councillors of Srinagar Municipal Corporation over tea, at Raj Bhawan, Srinagar, today. The Councillors of the SMC were specially invited to Raj Bhawan for an interaction with Governor.

Councillors informed Governor about problems being faced by them due to non-availability of communication/internet and also requested for suitable accommodation for them in the city. They also mentioned that the funds are yet to be made available to them in order to reach out to the people and fulfill the mandate given to them.

Governor was informed that the funds are not issue, but speedy execution and earliest resolving of issues is required to be done by the SMC. It was mentioned that during the current financial year, out of earmarked Grant-in-Aid, about Rs. 100.00 crores will be released shortly. Similarly, out of Rs. 500.00 crores to be made available to SMC under the 14th Finance Commission Award, Rs. 86.00 crores has already been made available to the SMC. In addition, 5000 Street Lights is being provided in the city through various Councillors and after agreement, the EESL Corporation of Government of India will start the task of 100% Street Lights of Srinagar city for a period of 7 years. EESL will start the work once the situation will improve in the valley.

Governor announced an additional grant of Rs. 18.50 crores @ Rs. 25.00 lacs per ward to the SMC for developmental works. These works will be executed after the identification by the concerned Councillors.

On the issue regarding Indian House Hold Latrines (IHHL), Governor assured that the verification of all the cases, which were pending, will be completed by 30th of September.

Regarding communication problems, Governor informed that 15 internet terminals have been made operational in office of the Deputy Commissioner, Srinagar, for usage by all the departments including the Srinagar Municipal Corporation. He also assured that mobile connectivity will also be restored very soon in J&K.

Governor observed that a delegation of Councillors will be sent outside J&K to study working of the Municipalities in other parts of the country. He advised the them to work devotedly for ensuring development of their Wards and providing uninterrupted basic facilities to people.

Governor noted that Raj Bhavan is open for public and every grievance reaching his office is addressed immediately. Besides, he said, his Advisors are regularly hearing and addressing public’s grievances.

Governor urged the Councillors to work towards making J&K peaceful, progressive and prosperous.