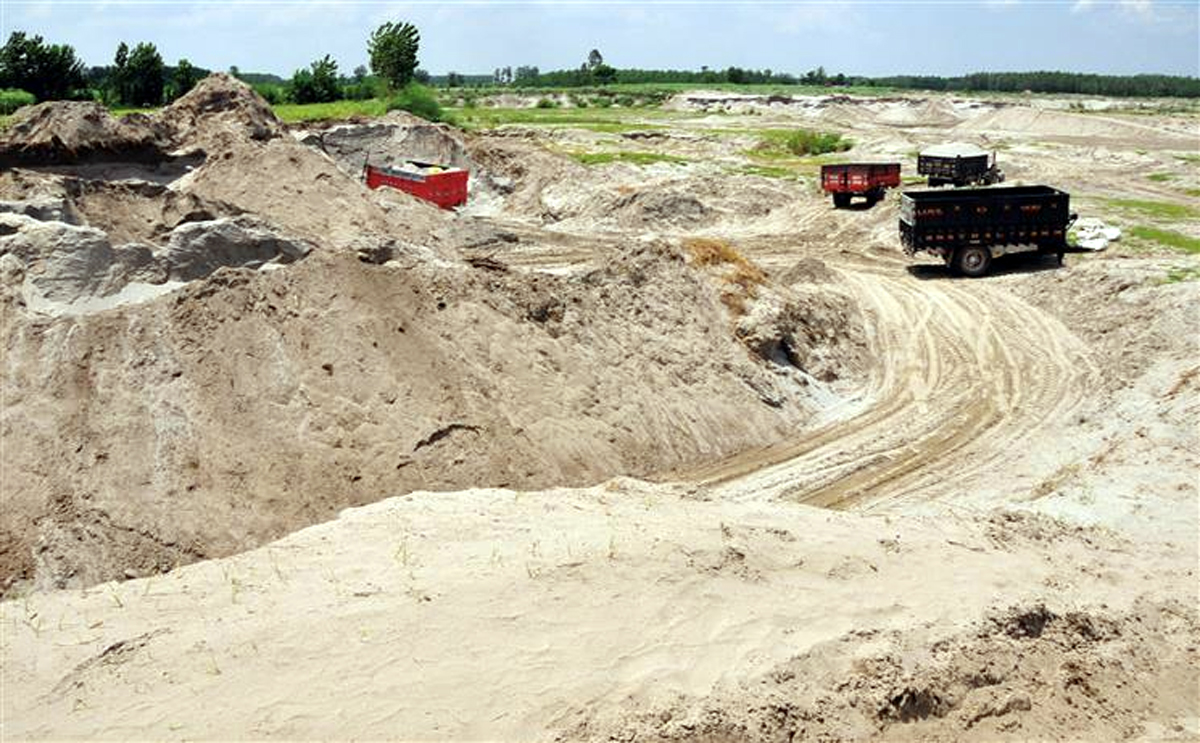 Govt suffers huge revenue loss as illegal mining continues in J&K
Gopal Sharma
JAMMU, Apr 14: The Government of the Union Territory of Jammu and Kashmir is losing huge revenue every month as mafia is fully controlling the illegal trade of miner mineral, while general public is being made to pay through its nose as the cost of material including sand and gravel has gone three times up in just last two years.
Official sources revealed that UT Administration has virtually failed to plug the revenue losses worth crores and keep a check on the ‘open loot of and plunder’ of the mineral resources of Jammu and Kashmir. Though Government claims to have auctioned more than 60% of the miner mineral river /Nallah bocks in Jammu and many other districts as well, but the sources in the G&M Department claimed that hardly a few lease have been granted to the parties so far, which has compounded the situation.
It said merely on the basis of auction the contactors can not start extraction in rivers and nallahs. They can only go for extraction when lease agreement is signed between the G&M and the contractor. Most of the parties have failed to get mandatory environment assessment committee clearance but still they are operating illegally that too, mainly during night hours.
“The G&M department would get royalty only after mining operation is commenced by the contractor legally after lease is granted in his favour. At present, majority of the operations are going on illegally and not even a single penny of revenue is going into the Government exchequer,” the sources revealed.
They further regretted that material worth crores is being consumed in 57 Kms long Ring Road project worth Rs 1600 crores from Raya Morh to Nagrota being executed by Gayatri Constructions; Jammu-Akhnoor Road project worth over Rs 750 crores by M/s Singla Constructions and M/s Tarmat India Ltd, longest bridge project worth Rs 206 crores on river Chenab at Pargwal, four lanning of highway project from Udhampur to Nashri by Gammon India Ltd, AIIMS project at Vijaypur, expansion of Jammu Airport etc. but majority of the material is being delivered to major companies by the ‘mafia’ in connivance with some insiders in the Government, causing extensive loss to the public exchequer. Hardly, a few short term permits have been granted for the Govt works. Over 90 % of the revenue is going into the coffers of the mafia operating illegally and some top officials at the helm of affairs, the sources revealed.
Despite ban imposed by the High Court on mining activity from Sidhra bridge to fourth Tawi bridge in the river, the mining activities goes on during night and early morning hours. Even the stone crusher operators in the vicinity use their machines during night hours and are carrying on their activities calendestinely, the sources said.
It said that after the High Court went tough on the Geology and Mining authorities and Police for their failure to check illegal mining activity in river Tawi and other areas in the recent past, the officers concerned started seizure of the tractor trolleys and Tippers loaded with sand, gravel and stones. Even under the plea of ban, they started imposing huge fine even to the tune of Rs 30,000 to 50,000 per vehicle. With this activity, many vehicles stopped operation even in other areas. The rates of the building material which was hardly Rs 1000 per trolley of sand one and half years ago has now gone up to Rs 3000 to Rs 3500, gravel from Rs 1500 per trolley to Rs 4000-4500 and stones from Rs 1000 to Rs 2800-3000 per vehicle. With this sharp hike in rate of building material, common man is suffering badly. The Government projects have also been delayed and hit with the shortage and the mafia is making easy money taking undue advantage of the situation while the Govt was watching silently.
Many people have either abandoned their construction works or waiting for some action from the Government side. Moreover, many Government projects like roads, bridges, building constructions etc have been badly affected with the shortage of building material in Jammu and other areas.
Official sources further added that in Jammu district alone, hardly 60 % of the rivers/ streams/ Nallah blocks have been auctioned but the mafia has taken control illegally of the entire area. In Pargwal area of river Chenab has not been auctioned since long but there also the same mafia is controlling the affairs illegally besides blocks in Akhnoor and Khour. The officers sitting at the top are well aware of the fact but have maintained silence due to the reason best known to them. The same is the position in Udhampur, Reasi, Rajouri, Samba and Kathua districts besides some other areas.
Director, Geology and Mining, J&K, OP Bhagat when contacted admitted shortage of material in many areas for the last many months but said that many river/ nallah blocks have been auctioned and the process of issuing Letter of Indent, Environment clearance, public hearings and allotment of contracts/ lease agreement was still in progress. He said after clearing all these formalities, the lease is granted to the parties for operation. These activities took some long time in the past.
Replying to a question regarding public sufferings and sharp hike in rates of sand and gravel, the G&M Director said after taking over recently he has issued 5-6 lease agreements in the UT. He said for Govt projects some short term permits have been issued and it is hoped that by next 15 days or maximum by one month, things will improve. With the clearance of more lease cases, rates will also come down and some collective initiative involving Administration is needed to tackle the rate issue of building material, the Director maintained.